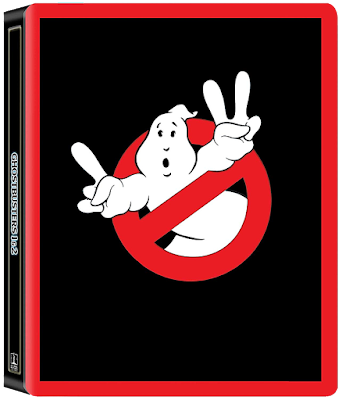 While I am tired of constantly upgrading the favorite films in my collection, I have to say that this is one double-dip that feels like it's worth it! Both classic GHOSTBUSTERS movies in 4K, with over two hours of new, never-before-seen extras?! All I have to say to that is: "I ain't 'fraid of no price!" Let's take a closer look at this new release fellow Ghostheads!

GHOSTBUSTERS II
Sony's Limited Edition 5-Disc Steelbook of GHOSTBUSTERS and GHOSTBUSTERS II is now available wherever movies are sold, and should cost between $43 - $46! With the addition of all the new extras, plus the clarity of 4K and Dolby Atmos, this is probably the closest thing we will ever see to a definitive release for these films! Order yourself a copy now from AMAZON or BULL MOOSE and rejoice in knowing that a new sequel (with the original castmembers) is on the horizon!