Before I start showcasing Umbrella's newest titles, I'd like to list off their May releases that I failed to report on last month, which included: ARCTIC, THE RARE BREED, CASH & COMPANY / TANDARRA, SIDECAR RACERS (Ozploitation Classics), KRULL (featured in its original aspect ratio for the first time!), and STEAMBOY. Moving on then....

As of June 5th, our friends at Umbrella Entertainment unleashed the full fury of Jason Blade in Brian Trenchard-Smith's double feature of DAY OF THE PANTHER & STRIKE OF THE PANTHER! Also available from Umbrella this month: METROPOLIS (which is based upon Osamu Tezuka's comic of the same name), Universal's THE BLACK CAT (featuring Boris Karloff and Bela Lugosi!), LORDS OF CHAOS the "Story of True Norwegian Black Metal," and Tom DeSimone's REFORM SCHOOL GIRLS!

* Also available on July 3rd is GOODBYE PARADISE. Part of Umbrella's continuing Ozploitation Classics line, this detective thriller follows a cynical ex-cop that is searching for a politician's missing daughter amidst the backdrop of political corruption and murder!

* On July 8th, Umbrella releases Jackie Chan's WHO AM I? to Blu-ray disc! This film features an amnestic Chan trying to regain his memory and take down a double agent.

* Later this year on September 4th, THE HOUSE THAT JACK BUILT makes its Australian Blu-ray debut. The disc appears to be bare bones. 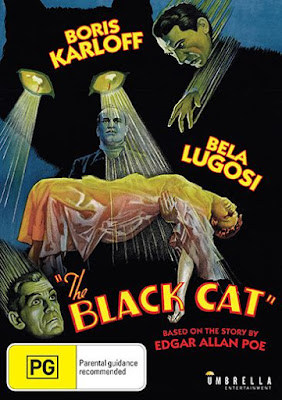 Synopsis: Horror icons Boris Karloff (FRANKENSTEIN) and Bela Lugosi (DRACULA) star in the shocking classic THE BLACK CAT, based on the works of Edgar Allan Poe. After a bus crash on a lonely Austrian road, American honeymooners, Joan (Jacqueline Wells) and Peter Alison (David Manners) are forced to spend the night at the house of Poelzig (Karloff), a sinister looking man who is engage in an intense feud with Dr. Werdegast (Lugosi), whom the couple met on the Orient Express.

Held captive in the mausoleum against their will, they soon discover that Poelzig is the high priest at Black MAss and has chosen Joan to be the Devil's bride. The couple is then faced with trying to escape the unspeakable treachery culminating in an unforgettable climax to this horror classic.

ORDER "THE BLACK CAT" ON DVD NOW FROM AMAZON.COM OR UMBRELLA ENTERTAINMENT! 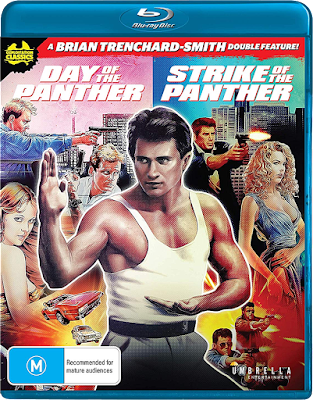 Synopsis: Get ready for an Ozploitation double-bill like you’ve never seen before! Shot on location in Hong Kong and Australia, DAY OF THE PANTHER and its sequel, STRIKE OF THE PANTHER, explode from the screen in a flurry of bloody fists, spiked bats, nunchucks and mullets! Packed with dangerous stunts and muscle cars smoking it up on suburban Perth streets, DAY and STRIKE are a double-bill of rarely seen Ozploitation mayhem that will leave you gasping to rewind and check what you have just seen.

Directed by Brian Trenchard-Smith (THE MAN FROM HONG KONG, FROG DREAMING), these long forgotten Australian action gems have been resurrected and scanned in 4K from their original 35mm interpositive elements. For the first time, these cult time-capsules have been remastered in HD and presented in their original aspect ratios.

DAY OF THE PANTHER
Martial-arts expert, Jason Blade (Edward John Stazak) goes after a criminal gang and its boss, who were responsible for the death of his partner.

STRIKE OF THE PANTHER
Jason Blade is back! After rescuing the daughter of prominent businessman David Summers, from a brothel in Dalkeith, he forms the Crime Task Force to assist in the capture of Jim Baxter (James Richards, AGENT PROVOCATEUR). When Baxter kidnaps Blade's girlfriend, Gemma Anderson (Paris Jefferson, THE COUNSELOR) Blades seeks revenge but Baxter has found refuge in a deserted power station and wired it with enough explosives to destroy half of Perth. 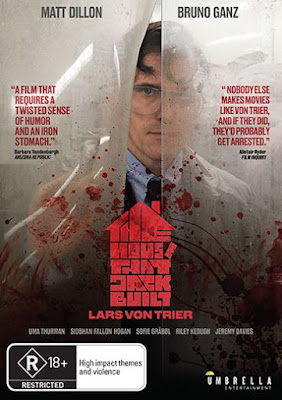 Synopsis: USA in the 1970s. We follow the highly intelligent Jack through 5 incidents and are introduced to the murders that define Jack's development as a serial killer. We experience the story from Jack's point of view. He views each murder as an artwork in itself, even though his dysfunction gives him problems in the outside world. Despite the fact that the final and inevitable police intervention is drawing ever near, which provokes and puts pressure on Jack, he is - contrary to all logic - set on taking greater and greater chances.

Along the way we experience Jack's descriptions of his personal condition, problems and thoughts through a recurring conversation with the unknown Verge - a grotesque mixture of sophistry mixed with an almost childlike self-pity and in-depth explanations of, for Jack, dangerous and difficult maneuvers.

ORDER "THE HOUSE THAT JACK BUILT" ON DVD FROM AMAZON.COM OR UMBRELLA ENTERTAINMENT! 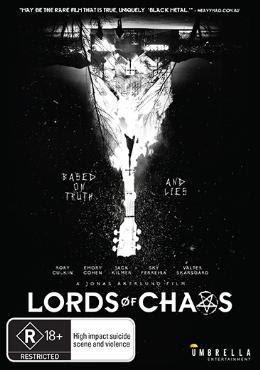 Synopsis: The story of True Norwegian Black Metal and its most notorious practitioners: a group of young men with a flair for publicity, church-burning and murder: MAYHEM.

Oslo, 1987, Seventeen-year-old Euronymous is determined to escape his idyllic Scandinavian hometown and create "true Norwegian black metal" with his band, MAYHEM. He's joined by equally fanatical youths - Dead and Varg. Believing that they're on the cusp of a musical revolution, the group gets even darker driven by the black metal dogma to spread evil.

They begin burning down churches and stealing tombstones for their record store. But when the excess catches up with them and Euronymous takes more credit than he's earned for the group's violent acts, Varg, fresh out of jail, arranges for a dark encounter to settle the score and ultimately determine who the darkest black metal musician is.

ORDER "LORDS OF CHAOS" ON DVD FROM AMAZON.COM OR UMBRELLA ENTERTAINMENT! 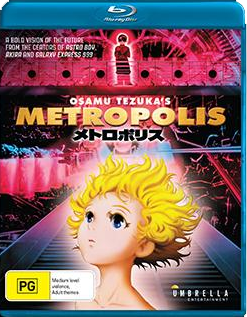 Synopsis: Brace yourself for a totally new experience in cutting-edge animation. Based on the classic comic created by Osamu Tezuka (ASTRO-BOY), written by Japanese anime legend Katsuhiro Otomo (AKIRA) and directed by Rintaro (GALAXY EXPRESS 999), Metropolis is a spectacular film featuring stunning imagery and unforgettable characters.

In the industrial, tri-level world of Metropolis, Duke Red is a powerful leader with plans to unveil a highly advanced robot named Tima. But Duke Red's violent son, Rock, distrusts robots and intends to find and destroy Tima.

Lost in the confusing labyrinth beneath Metropolis Tima is beginning a sweet friendship with the young nephew of a Japanese detective. But when Duke Red separates the two innocents, Tima's life - and the fate of the universe - is dangerously at stake. 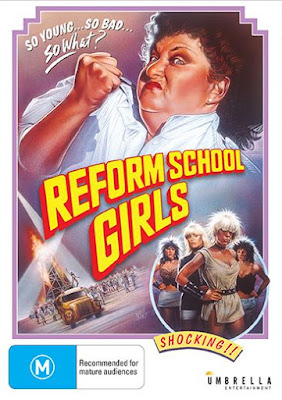 Synopsis: Enter Pridemore Juvenile Facility and you can look forward to a world without windows, without the possibility of escape and without hope. A claustrophobic world bursting at the seams with pent-up aggression and caged terror.

Jenny Williams, a young first-time offender, learns hard and fast that the rules of the outside world don’t apply at this reform school. Warden Sutter (Sybil Danning) rules with an iron fist. Edna (Pat Ast), dictates sadistic order and Charlie (Wendy O. Williams), the unofficial head of the cell-block, preys on the weak. At Pridemore, even “solitary” is preferable to the beating and sexual abuse that run rampant in the cell-blocks.

Do Jenny and her close-knit group of friends stand a chance in such brutal surrounding? Can they even hope to escape with their health and sanity? And will they live long enough to tell the horrible truth of Pridemore’s atrocities? The answers lie in the action-packed conclusion of REFORM SCHOOL GIRLS.