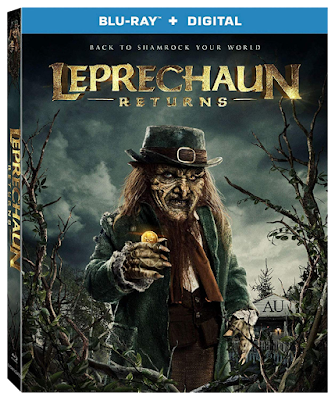 THE LEPRECHAUN FRANCHISE CONTINUES IN THIS SYFY CHANNEL SEQUEL!

The LEPRECHAUN series has had a surprising longevity, and has never been afraid to drop its antagonist into the most batsh*t crazy scenarios possible. From Las Vegas, to Outer Space, and even "Tha' Hood" Warwick Davis' beloved Leprechaun has pretty much done it all!

A reboot of the series, LEPRECHAUN ORIGINS, was released in 2014 and replaced Warwick Davis with Dylan Postl (aka WWE's "Hornswoggle") - Needless to say, it failed to impress both critics and fans. And now, we've gotten to the EIGHTH film in the Leprechaun saga courtesy of the SyFy Channel. Directed by Astron-6's Steven Kostanski, LEPRECHAUN RETURNS features Mark Holton (Ozzie Jones from the original film!) plus a new actor (Linden Porco) under the Leprechaun makeup! While I'm bummed that Warwick Davis did not return to his iconic role, Kostanski's involvement intrigues me enough to check this one out!

Synopsis: The deadly, wisecracking Leprechaun is back in all his gory glory. When the sorority sisters of the Alpha Upsilon house decide to go green and use an old well as their water source, they unwittingly awaken a pint-sized, green-clad monster. The Leprechaun wants a pot of gold buried near the sorority house, but first he must recover his powers with a killing spree—and only the girls of AU can stop him.

Extras:
LEPRECHAUN RETURNS arrives on both DVD & Blu-ray on Tuesday, June 11th and is debuting at the low price of just $10! If you're a fan of the series, or just an obsessive completionist, get yourself a copy of this film today from AMAZON, BULL MOOSE, or DIABOLIK DVD!