Season 1 of CREEPSHOW: THE SERIES Brings you 12 Tales of Terror! 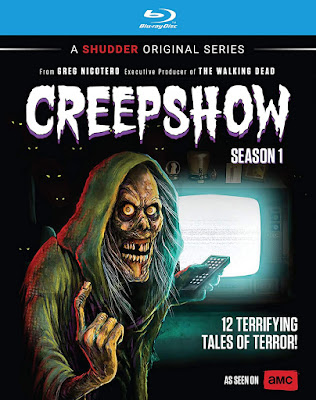 THE SHUDDER ORIGINAL SERIES MAKES THE LEAP TO DVD & BLU-RAY ON JUNE 2ND!

I absolutely adore CREEPSHOW and its sequel CREEPSHOW 2 (which I secretly love more than the original), so I was pretty pumped when CREEPSHOW: THE SERIES arrived on Shudder! While I will admit that the six episodes (which contain two stories each) are a mixed bag, overall I was pretty pleased with the show and am looking forward to the second season!

And even if you didn't really dig the new series, you have to admit: It was infinitely better than the abysmal CREEPSHOW 3! CREEPSHOW: THE SERIES arrives on DVD & Blu-ray tomorrow, and comes complete with a comic art booklet, audio commentaries, cast & crew interviews, and other goodies!

Series Synopsis: CREEPSHOW, the new anthology series based on the 1982 horror comedy classic, is still the most fun you’ll ever have being scared! A comic book comes to life in a series of twelve vignettes over six episodes, exploring terrors from murder to the supernatural and unexplainable. Haunted dollhouses, werewolves, murderous goblins, villainous trick-or-treaters, the dead, and medical marvels are just a few of the things to watch out for in this new series. You never know what will be on the next page….

Extras:
The first season of CREEPSHOW: THE SERIES arrives on Blu-ray (and DVD) on June 2nd, and should cost between $24 - $26! Not every episode is a winner, but I truly appreciated the various nods to the classic CREEPSHOW films (and other horror movies), as well as the series creators' heavy reliance on practical f/x! If you enjoy Horror anthologies as much as I do, you'll want to add this series to your collection. Order a copy today from AMAZON, BULL MOOSE, or DIABOLIK DVD!