Scream Factory Reveals THE EVIL OF FRANKENSTEIN on May 19th! 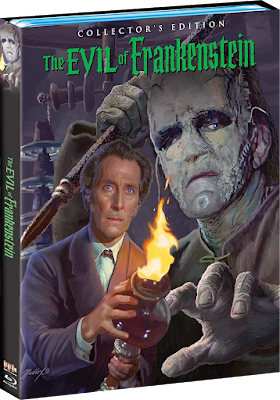 THE HAMMER HORROR CLASSIC GETS A COLLECTOR'S EDITION BLU-RAY FROM SCREAM FACTORY WITH ALL THE TRIMMINGS!

I own Universal's 8-Film Hammer Horror Collection, and one of my personal favorites in the set is THE EVIL OF FRANKENSTEIN! When Scream Factory announced that they were adding it to their prodigious catalog, I was pretty certain I didn't want/need to upgrade.

And then I read all the information about this release and I instantly changed my mind, because Scream Factory's new Collector's Edition contains a new 4K scan, and a bounty of bonus features! If you're a Hammer Horror fan, and want the absolute best release of THE EVIL OF DRACULA, then you need to order a copy of this disc ASAP!

Synopsis: Frozen in ice, can the creature be brought back to live again?! Horror great Peter Cushing stars in this fantastic tale as the monster's creator, Baron von Frankenstein, determined to bring the creature back to life. Long thought destroyed, Dr. Frankenstein's creation is discovered frozen alive and resurrected in his laboratory. Unfortunately, the creature's mind is dormant and, much to the Baron's horror, he finds that only a hypnotist named Zoltan (Peter Woodthorpe) can order the creature to do his unfathomable bidding now!

Extras:
Now that's a Collector's Edition Vault Dwellers: An all new transfer, two cuts of the film, new cast & crew interviews, and more! Scream Factory's THE EVIL OF FRANKENSTEIN Blu-ray arrives at retailers on Tuesday, May 19th and should cost between $25 - $29! Order yourself a copy today from AMAZON, BULL MOOSE, DIABOLIK DVD, or directly from SHOUT! FACTORY (which will also net you a new 18 x 24 poster of Mark Maddox' awesome new cover art)!