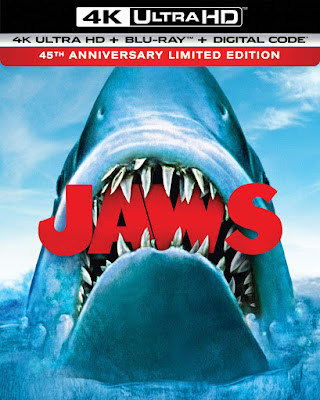 JUST WHEN YOU THOUGHT IT WAS SAFE TO STOP UPGRADING TITLES IN YOUR MOVIE COLLECTION: "JAWS" ARRIVES ON 4K ULTRA HD DISC!

I've owned JAWS in various formats over the decades (twice on VHS, twice on DVD, once on Blu-ray), played the video games, read the book (several times), reviewed and podcasted about Spielberg's iconic movie, and even took a fantastic "JAWS Tour" on Martha's Vineyard several years ago! I can quote JAWS almost verbatim, and have seen it in 35mm twice while chugging some Narragansett beer - needless to say, it is my favorite film of all time! Universal's last Blu-ray release of this Spielberg classic was a revelation - the film was color-corrected, cleaned up considerably, and given an amazing new audio track that made experiencing JAWS at home even more immersive! There was absolutely no way that this film could be improved upon.... UNTIL NOW!

Synopsis: When a young woman is killed by a shark while skinny-dipping near the New England tourist town of Amity Island, police chief Martin Brody (Roy Scheider) wants to close the beaches, but mayor Larry Vaughn (Murray Hamilton) overrules him, fearing that the loss of tourist revenue will cripple the town. Ichthyologist Matt Hooper (Richard Dreyfuss) and grizzled ship captain Quint (Robert Shaw) offer to help Brody capture the killer beast, and the trio engage in an epic battle of man vs. nature.

Directed by Academy Award winner Steven Spielberg, JAWS set the standard for edge-of-your-seat suspense, quickly becoming a cultural phenomenon and forever changing the movie industry. Featuring an amazing cast, and an unforgettable score that evokes pure terror, JAWS remains one of the most influential and gripping adventures in motion picture history!

Extras:
Admittedly, I'm not keen on buying the same movie AGAIN, and I'm not a big fan of the new cover art BUT... it's JAWS. And I need the absolute best version of this film that I can get my paws on dammit! Universal's 45th Anniversary Limited Edition 4K release of JAWS swims up and bites retailers on the ass on Tuesday, June 2, and should cost between $20 - $24! Upgrade with me fellow JAWS fans and order a copy today from AMAZON, BULL MOOSE, or DIABOLIK DVD!