Scream Factory Wants to Hire You for the GRAVEYARD SHIFT in Late July! 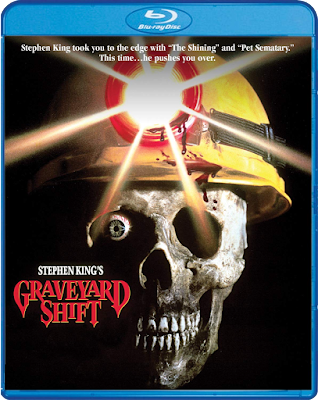 Last September I mentioned GRAVEYARD SHIFT in an entry into my WANTED ON BLU-RAY column. Seeing as how Scream Factory was releasing a lot of Paramount titles, I made an educated guess that this oft-forgotten 90s Horror gem would end up in their catalog in the not too distant future.

And now, eght months later, I stand before you all with a big grin on my face because I WAS RIGHT! So get excited Vault Dwellers because in just over two months, we'll all get to enjoy this (very loose) adaptation of King's short story from his Night Shift anthology!

Synopsis: Workers clock in for their shift ... and clock out for good! From master storyteller Stephen King (Pet Sematary) comes his most terror-filled tale yet ...

When an abandoned textile mill is reopened, several employees meet mysterious deaths. The link between the killings is the hour: all occurred between 11 p.m. and 7 a.m. – the GRAVEYARD SHIFT. The sadistic mill foreman has chosen a group to clean up the mill's rat-infested basement. But what the workers find is a subterranean maze of tunnels leading to the cemetery – and an unimaginable horror that comes alive in the dead of night ...

Extras:
The bonus features for Scream Factory's GRAVEYARD SHIFT Blu-ray are still in progress as of my posting this, but I'll be sure to update this post as soon as that info has been supplied to me! In the meantime, you can guarantee a copy of GRAVEYARD SHIFT for your personal collection by ordering it now (for between $20 - $25) through AMAZON, BULL MOOSE, DIABOLIK DVD, or directly from SHOUT! FACTORY.