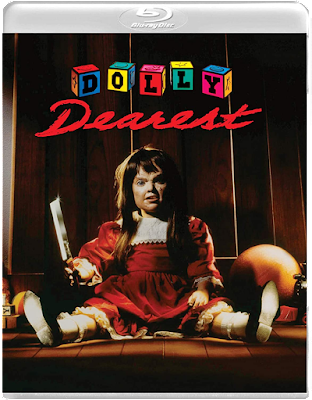 VINEGAR SYNDROME BRINGS THIS LONG-LOST CULT CLASSIC TO BLU-RAY FOR THE FIRST TIME WITH A NEW 2K RESTORATION!

Note: You can currently order this title directly from Vinegar Syndrome right now during their HALFWAY TO BLACK FRIDAY SALE, which ends on Monday (05/25/2020) at midnight.

DOLLY DEAREST is a film that I have not seen in a very long time. It used to make its rounds on USA Network (along with other classics like SPOOKIES), and up until recently, I wasn't sure if it was ever going to get a legit Blu-ray release. But never say never Vault Dwellers, because Vinegar Syndrome has plucked this post-CHILD'S PLAY killer doll flick from obscurity, given it a 2K restoration, and unleashed it upon the world! Let's take a closer look at this VinSyn disc, shall we gang?

Synopsis: American family Elliot and Marilyn Wade, along with their young children Jessica and Jimmy, have just relocated to Mexico, where Elliot has taken over a doll factory. As they settle into their fresh surroundings, Jessica forms a special bond with her new doll, spending hours with it in her large playhouse. But soon, her mother and older brother sense that something isn't quite right with the sweetly faced toy. It's not long before strange and frightening events start to occur, and members of the household begin turning up dead in a series of apparent 'accidents’.

Extras:
DOLLY DEAREST's official street date is Tuesday, May 26th and it should cost between $20 - $25! If you'd like to add it to your collection, either out of nostalgia or curiosity, order a copy now from AMAZON, BULL MOOSE, DIABOLIK DVD, or directly from VINEGAR SYNDROME (especially if you're a fan of slipcovers - VinSyn's are the best!)!