GRAVE OF THE VAMPIRE and THE MANITOU Debut on Blu-ray on April 16th! 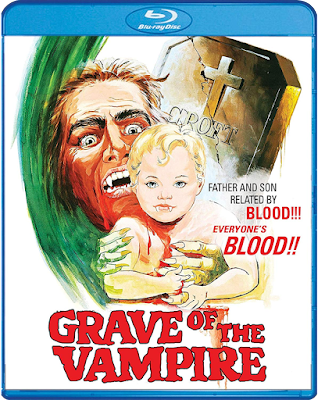 Scream Factory is about to release two awesome movies to Blu-ray for the first time on Tuesday! GRAVE OF THE VAMPIRE has been on my radar for a number of years and I've never watched it... even though I actually own a copy on DVD. As for THE MANITOU, I've always been a big William Girdler fan so the Blu-ray release of this film has gotten me pretty excited! I've always had a soft spot for this bflick, which features one of the most insane endings you will ever witness! Still not sold on my enthusiasm alone? Then let's take a closer look at both of these new Scream titles!

Synopsis: The vampire Caleb Croft has awakened from his unholy slumber — with an insatiable lust for blood and the pleasures of the flesh. A brutal attack on a pair of lovers allows for his desire to be temporarily fulfilled ... but his unspeakable acts leave the woman pregnant with his child. Ignoring all advice, she gives birth to the progeny of their unwanted union: James — who will only drink blood from his mother's breast. As James matures, he learns of his father's true nature, and sets out to destroy him.

Extras:
GRAVE OF THE VAMPIRE will be available wherever Blu-ray discs are sold on Tuesday, April 15th and should cost between $20 - $25! You can order yourself a copy today from AMAZON, BULL MOOSE, DIABOLIK DVD, or directly from SHOUT! FACTORY. 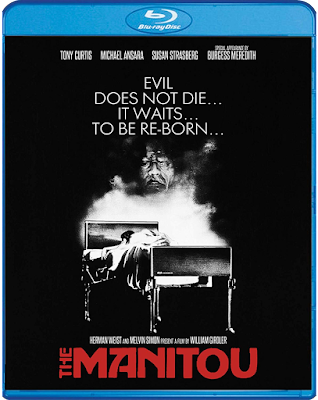 Synopsis: What surgeons thought to be a tumor growing on the neck of patient Karen Tandy (Susan Strasberg) is actually a fetus growing at an abnormally accelerated rate. But when Karen reaches out to former lover and phony psychic Harry Erskine (Tony Curtis), she discovers that she is possessed by the reincarnation of a 400-year-old Native American demon.

Now with the help of a modern-day medicine man (Michael Ansara), Erskine must survive this ancient evil’s rampage of shocking violence and forever destroy the enraged beast known as THE MANITOU.

Stella Stevens, Ann Sothern and Burgess Meredith co-star in this infamous shocker produced and directed by William Girdler (GRIZZLY, DAY OF THE ANIMALS) from the best-selling novel by Graham Masterton.

Extras:
With the promise of the absolute BEST audio & video quality we will probably ever see for this film, plus the inclusion of new extras, Scream Factory's Blu-ray of THE MANITOU is definitely a must-own for yours truly! It drops the same day (tomorrow) as GRAVE OF THE VAMPIRE and should be available at most e-tailers for between $24 - $27! Order your copy of this William Girdler classic now from AMAZON, BULL MOOSE, DIABOLIK DVD, or directly from SHOUT! FACTORY.