Dude Apparel is an all-new clothing label from artist Tom Hodge aka The Dude Designs. If his name doesn't ring a bell, I guarantee you that you've seen his work Vault Dwellers! Along with creating the artwork for numerous Blu-ray covers (e.g. Vestron Collector's Series' WISHMASTER and WARLOCK collections, Scream Factory's THEY LIVE) and designing some fantastic movie posters (HOBO WITH A SHOTGUN, WOLFCOP, DEAR GOD NO!), Tom has also authored a book (VHS: Video Cover Art) and shot a short film entitled TEDDY BEAR'S PICNIC.

And now Tom is unveiling a mega-cool collection of totally unique shirts that will take you back to the good ole days when video rental stores reigned supreme! I myself actually worked in several mom & pop video stores for a number of years, but for those of you who never had the chance, you can partially live your fantasy thanks to Tom's VIDEO STORE STAFF COLLECTION 1!

Based on original 80s video stores for authenticity, Dude Apparel has revisited these bastions of the VHS rental boom and reinterpreted them with all new designs to create this collection of high-end fashion apparel for your viewing and wearing pleasure!  This new range of stylish video store staff tees, sweatshirts and women’s tank tops, come in ‘premium’ double-sided and ‘Standard’ single-sided options.


Which video store will YOU run?

A few words from Tom Hodge:
“I’m very proud to launch Dude Apparel after a year's planning and organization, with an inaugural collection that combines a lot of my passions: VHS, Vintage, and 80s/90s fashion.

I wanted to create a collection that had a conceptual edge behind it, something I have dreamed of finding in a vintage store… RADICAL VIDEO STORE STAFF TEES! I did a lot of research into the wording and phrasing too, which was used in the old video store paraphernalia, to create fashion items that have some cultural meaning behind them.

‘VHS’ Video collecting has really exploded globally in the past 3 years since I released VHS Video cover art. With tapes tripling in value from an average of 20p to £20+ now!

There is a real connection to VHS tapes and Video stores, the act of browsing the shelves of numerous salacious tape artworks for such incredible titles like NEON MANIACS, SURF NAZIS MUST DIE, BRONX WARRIORS, and THE VIDEO DEAD…They REALLY don’t make em’ like that anymore!

A weekend's entertainment was defined by the excitement of going to the video store - these numerous independent ‘mom and pop’ video stores which appeared everywhere and always had these wicked names like Videostar or Video Edge. They WERE the entertainment hub for a generation growing up in the 80s/90s and consequently have been ingrained emotionally in our psyches as adults. So I wanted to celebrate that and I’m beyond excited present you with the righteous Video Store Staff Collection 1.

And if these shirts take off, I'll get people to send in their favorite old video stores and I'll give them a rebirth in t-shirt form!”

Now THAT is a cool idea! The mere thought of wearing the old Electric City Video logo on a shirt is definitely putting a big smile on my face, but the only way that can happen is if YOU buy Tom's new video store tees, so get to it Vault Dwellers!

To see the full line of Video Store Staff tees and other Dude-related items, visit DudeDesigns.com! Also be sure to follow The Dude Designs on Facebook or Twitter to keep up to date on all his latest projects and releases! 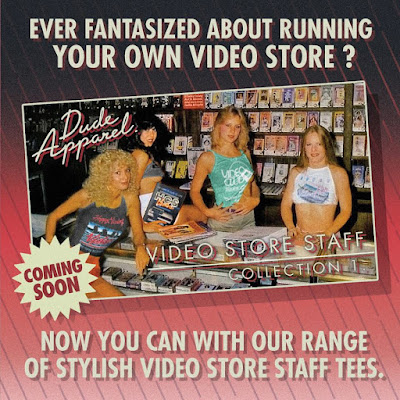 Posted by The Vault Master at 3:45 AM