Arrow Video Brings KEOMA to Blu-ray on April 16th With An All New 2K Restoration & Hours of Extras! 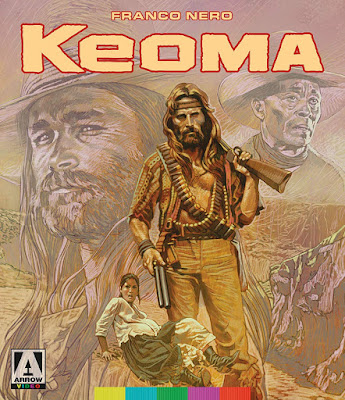 ONE OF THE GREATEST SPAGHETTI WESTERNS OF ALL TIME GETS A STELLAR BLU-RAY RELEASE!

I was never a big fan of Westerns growing up (quite frankly I found them boring), but then I stumbled across Sergio Leone's ONCE UPON A TIME IN THE WEST, and my life changed forever. After that I watched his "Man With No Name Trilogy," the SABATA films, DJANGO, the TRINITY series, and numerous others. And yet I've somehow missed out on KEOMA, which apparently is one of the best in the entire sub-genre. I think it's high time I check it out, now that Arrow Video has taken the trouble to release this amazing Special Edition Blu-ray of Enzo G. Castellari's highly-praised film!

Synopsis: A strikingly original spaghetti western with a unique elegiac tone, Keoma truly is a one-of-a-kind classic of its genre…

The legendary Franco Nero (DJANGO, THE FIFTH CORD) stars in the titular role as a half-breed gunfighter who returns from the killing fields of the civil war to find his hometown riddled with the plague, its inhabitants terrorized (with the help of Keoma’s own estranged half-brothers) by tyrannical gang leader Caldwell (Donald O'Brien - ZOMBIE HOLOCAUST).

Keoma’s father (Willian Berger - SABATA, SARTANA IN THE VALLEY OF DEATH) welcomes his prodigal son’s return, but when Keoma saves a vulnerable pregnant woman (Olga Karlatos - ZOMBIE FLESH EATERS) from Caldwell's thugs, the stage is set for a violent confrontation. With the help of his father and his friend, the freed slave George (Woody Strode - SPARTACUS), Keoma prepares to take a savage revenge on Caldwell and his gang.

Directed with immense flair and virtuosity by veteran Enzo G. Castellari (who channels Sam Peckinpah and Sergio Leone in equal measure), KEOMA is an epic film of Shakespearean and biblical proportions, which boasts compelling performances and thrilling violent action. Truly epic in scope, KEOMA is considered by many to be one of the greatest spaghetti westerns.

Extras:
Arrow Video's fully-loaded Special Edition of KEOMA is currently available wherever Blu-ray discs are sold, and should cost between $24 - $28! Fill that empty spot in your high-def spaghetti western collection now by ordering a copy from AMAZON, BULL MOOSE, DIABOLIK DVD, or directly from ARROW VIDEO!