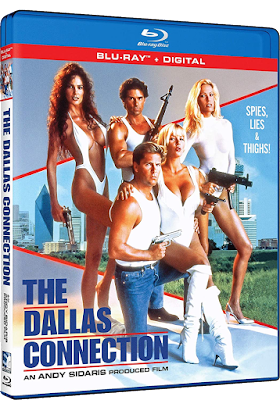 MILL CREEK ENTERTAINMENT GIVES US ANOTHER DOSE OF BULLETS, BOMBS, AND BABES ON MAY 12TH!

Believe it or not Vault Dwellers, I still have yet to collect and watch most of Mill Creek's fantastic HD releases of Andy Sidaris' infamous "Triple B Series." With only two more films left to release onto Blu-ray disc (DAY OF THE WARRIOR and L.E.T.H.A.L. LADIES: RETURN TO SAVAGE BEACH), here's hoping that the powers that be at Mill Creek eventually release a boxed set containing all twelve films!

But even if a set never materializes (even though they'd be crazy not to do it!), I can't complain about the cost of each standalone release, which is typically $10 - $12. But enough about my box set pipe dreams - let's take a closer look at Mill Creek's two upcoming (Drew) Sidaris releases!

Synopsis: Julie Strain, Samantha Phillips, and Bruce Penhall star in the tenth entry into Andy Sidaris' "Bullets, Bombs, and Babes" franchise! The agents of L.E.T.H.A.L. are hired to protect esteemed scientists in charge of a sophisticated, state-of-the-art satellite weapon-tracking system that are being targeted for assassination before a major scientific convention in Dallas!

Extras:
THE DALLAS CONNECTION will be available to own on Tuesday, May 12th and should cost between $12 - $15! If you are questing to own the entirety of the Triple B Series, then you best order yourself a copy now from AMAZON, BULL MOOSE, or DIABOLIK DVD! 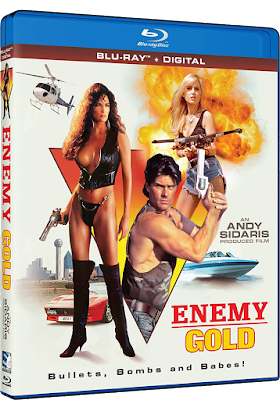 Synopsis: While on a mission to stop a drug operation, three Federal agents accidentally discover gold from the Civil War. With the aid of a corrupt agent, a ruthless criminal kingpin will hunt them down, one by one in the ninth film in the Bullets, Bombs, & Babes series!

Extras:
Mill Creek's ENEMY GOLD Blu-ray will also be released on May 12th, and should cost between $12 - $15. Get one step closer to owning the dozen feature films that make up this incredible film franchise now by ordering a copy of ENEMY GOLD today from AMAZON, BULL MOOSE, or DIABOLIK DVD!