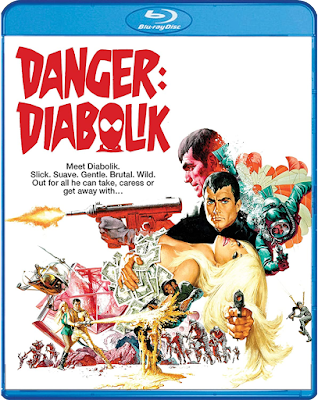 Truth be told Vault Dwellers, I am fairly familiar with this movie, but I've never seen DANGER: DIABOLIK without a certain trio of silhouettes in the lower left side of my TV screen, lobbing insults at the film. Of course I'm talking about DANGER: DIABOLIK's appearance on the final (Mike era) episode of Mystery Science Theater 3000! Oddly enough though, I didn't really think this movie was truly bad enough to end up on the show, so I'm super glad to see it get a standalone Blu-ray release here in the States! If you enjoy Euro-crime thrillers and/or heist flicks, you may just want to check this one out Vault Dwellers!

Synopsis: The suave, psychedelic-era thief called Diabolik (John Phillip Law - THE GOLDEN VOYAGE OF SINBAD, SPACE MUTINY, BARBARELLA: QUEEN OF THE GALAXY) can't get enough of life's good – or glittery – things. Not when there are currency shipments to steal from under the noses of snooty government officials and priceless jewels to lift from the boudoirs of the super-rich.

The elusive scoundrel finds plenty of ways to live up to his name in this tongue-in-cheek, live-action caper inspired by Europe's popular Diabolik comics. He clambers up walls, zaps a press conference with Exhilaration Gas, smacks a confession out of a crime lord while freefalling with him from an airplane, and pulls off the heist of a twenty-ton gold ingot. Impossible? No, diabolical – DANGER: DIABOLIK, to be exact!

Extras:
Shout! Factory's DANGER: DIABOLIK Blu-ray thankfully ports over all the extras from the previous Paramount DVD release, and tosses in that new audio commentary for good measure! DANGER: DIABOLIK will be available wherever Blu-ray discs are sold on Tuesday, May 19th and should cost between $24 - $30! If you want to get "Deep, Deep, Down" with John Phillip Law, order yourself a copy today from AMAZON, BULL MOOSE, DIABOLIK DVD, or directly from SHOUT! FACTORY.