The Warner Archive Collection Wants You to Solve THE MYSTERY OF THE WAX MUSEUM! 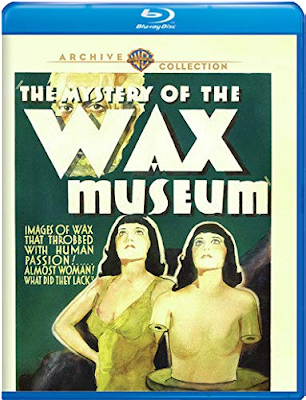 THE ORIGINAL "HOUSE OF WAX" MAKES ITS BLU-RAY DEBUT ON MAY 12TH THANKS TO THE WARNER ARCHIVE COLLECTION!

It may shock many of you to know that 1953's HOUSE OF WAX, featuring the legendary Vincent Price, was in fact a remake of Michael Curtiz' 1933 classic THE MYSTERY OF THE WAX MUSEUM. For the longest time, the only way to see it was to purchase the (now out of print) 3D Blu-ray release of HOUSE OF WAX! That all changes on Tuesday (May 12th!) when Warner Archive gives this (once lost) film an official Blu-ray release that boasts a gorgeous new HD restoration and exclusive bonus features!

Synopsis: Bodies are mysteriously disappearing all over town, and a new wax museum has just opened. Is there a connection? But of course! In this horror classic, Fay Wray (KING KONG) stars as the intended next victim of a mad wax sculptor obsessed with her resemblance to one of his prior creations. Glenda Farrell plays a quintessential wisecracking newspaper reporter, and noted actor Lionel Atwill is the deranged artist who loses his studio to a fire set by his partner.

Filmed in the early Two-Color Technicolor® process, THE MYSTERY OF THE WAX MUSEUM was considered a lost film for decades, until a well-worn print was discovered nearly 50 years ago. Thanks to the meticulous new restoration presented on this disc, the film can now be experienced as intended!

Extras:
THE MYSTERY OF THE WAX MUSEUM will be available tomorrow, wherever Blu-ray discs are sold, and should cost you between $18 - $22! Add this classic to your collection now (to keep your Blu-rays of both the 1953 and 2005) and order it from AMAZON, BULL MOOSE, DIABOLIK DVD, or directly from WARNER ARCHIVE's website.