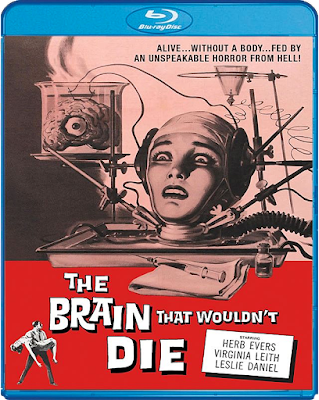 THE B-MOVIE CLASSIC, "THE BRAIN THAT WOULDN'T DIE," IS NOW PART OF SCREAM FACTORY'S GROWING CATALOG, AND WILL BE AVAILABLE ON DECEMBER 22ND - JUST IN TIME FOR CHRISTMAS!

My first viewing of THE BRAIN THAT WOULDN'T DIE, was on Mystery Science Theater 3000, during the first episode of Season 5. It has since become a minor favorite of mine.

Film Synopsis: When Dr. Bill Cortner loses his sweetheart, Jan, in a car accident, he refuses to give up hope for her life. Scooping up her decapitated head, he brings it back to the lab for resuscitation. But keeping her head alive is one thing – finding her a new body is quite another.

So while the mad doctor is out looking for spare parts, she's stuck at home going out of her mind – literally! And nothing will stop her from getting revenge on the man who is keeping her as a trophy girlfriend!

Special Features:
Wowsers! This is far more love than I ever expected THE BRAIN THAT WOULDN'T DIE to receive from any distribution company! And the fact that the MST3K episode is included as an extra automatically makes this a must-own in my book!

Don't lose your head - Order this release now from AMAZON.COM, or directly from SHOUT! FACTORY! If you choose the latter, your disc will show up TWO WEEKS EARLY!