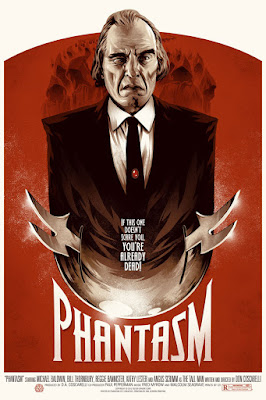 File the following press release under "things you never thought you'd see in your lifetime." I got an e-mail yesterday from Well Go USA touting some of the best news I've heard in some time: They had picked up the distribution rights to Don Coscarelli's PHANTASM! Remastered in 4K (spearheaded by J.J. Abrams!), the film has been promised a small theatrical re-release (September 24th!) and a (finally!) legit Blu-ray release as well. But the good news did not stop there fellow Tall Man phans....

Along with PHANTASM: REMASTERED, Well Go USA is also issuing HD redos of PHANTASM III: LORD OF THE DEAD and PHANTASM: OBLIVION. Plus.... they are releasing PHANTASM RAVAGER theatrically (select theaters on October 7th) and on VOD, DVD, and Blu-ray later this year! Go ahead and scream with delight. It's ok, I'll wait.

While you may be wondering why PHANTASM II is missing from the news, it is because that particular sequel is currently available exclusively through Scream Factory. Here's hoping that Scream Factory works with Well Go USA to give us phans a complete collector's set on DVD & Blu-ray (not an impossibility when you realize that there's been Blu-ray sets for FRIDAY THE 13TH and HALLOWEEN). At the very least, Well Go USA should creature a box to house their four discs, and leave a little space to fit your copy of PHANTASM II into it. (Because let's face it, if you're reading this, you probably own it.)

For a further details, scope out the press release below and get excited!!

On October 7th, for the first time ever, the Phantasm series will be available in remastered, high-definition versions across all cable and digital platforms.

A Blu-ray and DVD Collector’s Edition Set of the Phantasm series will follow later this year, along with individual Blu-rays and DVDs of Phantasm: Remastered and Phantasm: Ravager, all of which will be packed with special bonus features.

Phantasm: Remastered and Phantasm: Ravager will hit theaters as well. Phantasm: Remastered will screen across the county as part of the inaugural Art House Theater Day on September 24, 2016, and Phantasm: Ravager will be released in select theaters on October 7th, day and date with its digital HD release. In addition, fans across the country will have the ability to bring both films to their hometowns using Tugg, an innovative platform that empowers individuals and groups to host screenings in their local theaters and community venues.

Phantasm: Remastered came into being when filmmaker J.J. Abrams, a fan of the original, wanted to screen the film for his team at Bad Robot Productions- only to find the available prints in terrible shape. Working on the premises of Bad Robot with their expert staff, director Don Coscarelli was invited by J.J. to supervise a meticulous 4K digital remaster using their state-of-the-art tools. This included a brand-new 5.1 audio mix using the original stems, ensuring Phantasm will forever be available to scare the hell out of generations to come with perfect picture and sound.

Phantasm: Ravager is an all-new film that brings one of cinema’s longest-running franchises (36 years!) without a reboot to a close, with Mike (A. Michael Baldwin) and Reggie (Reggie Banister) teaming up to confront the dimension-hopping Tall Man (Angus Scrimm, in his final role) once and for all.


“The Phantasm films are iconic, and Well Go is ecstatic to have them. We get to bring a classic to a whole new audience with Phantasm: Remastered, and with Phantasm: Ravager we get to bring the die-hard fans - of which I am one - the closure they’ve been waiting for,” said Dylan Marchetti, SVP of Well Go USA Entertainment. “This is the kind of deal that every distributor dreams of doing, and when you get to do it with a true independent like Don, well, that’s just the extra cherry on the sundae.”

"I’m thrilled to be working with Well Go USA and their talented and dedicated team,” said Phantasm creator Don Coscarelli. “I am excited by their innovative new ideas and intense drive to bring the Phantasm franchise to a new generation of fans."

Phantasm: Remastered, Phantasm III: Lord of the Dead, and Phantasm IV: Oblivion were written and directed by Don Coscarelli. Phantasm: Ravager was written by Coscarelli and David Hartman, executive produced by Brad Baruh, and directed by Hartman. All films star Angus Scrimm, Reggie Bannister, and A. Michael Baldwin.

As excited as I am for this news, I do have a few reservations, but that's mainly because I'm largely unfamiliar with Well Go USA. Aside from a few foreign titles (TAI CHI ZERO, TAI CHI HERO, and CHRONICLES OF THE GHOSTLY TRIBE) I haven't seen enough of their releases to decide if they are up to the task. Here's hoping that they knock it out of the park with the design of the packing and cover art, and most importantly, the extras!

Details on Well Go USA's upcoming DVDs and Blu-rays have yet to be released, so stay tuned as I anxiously await more updates!