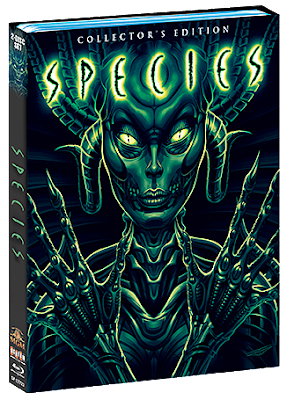 "MEN CANNOT RESIST HER. MANKIND MAY NOT SURVIVE HER." GET SCREAM FACTORY'S COLLECTOR'S EDITION BLU-RAY OF "SPECIES" ON JULY 11TH!

SPECIES is one of the best genre films that the '90s had to offer! It has a cool story, an incredible cast, and some fantastic creature f/x! So it's no surprise that this one is a definite must-own in my book! I'm quite happy that this title found a home with Scream Factory, particularly because they have already released the three SPECIES sequels on Blu-ray!

Hmm.... does that mean a SPECIES boxed set is a possibility down the road?

Synopsis: When a beautiful human-alien hybrid named Sil (Natasha Henstridge) escapes from observation, scientist Xavier Fitch (Kingsley) dispatches a crew of experts to find her before she is able to fulfill her horrific purpose: to mate with unsuspecting men and produce offspring that could destroy mankind.

As Sil's deadly biological clock ticks rapidly, Fitch and his team are hurled into a desperate battle in which the fate of humanity itself hangs in the balance! SPECIES was directed by Roger Donaldson (THE BANK JOB, THE RECRUIT) and produced by Frank Mancuso, Jr. (STIGMATA, FRIDAY THE 13TH PART II), and stars Ben Kingsley (SHUTTER ISLAND), Michael Madsen (THE HATEFUL EIGHT), Alfred Molina (FEUD), Forest Whitaker (ARRIVAL), Marg Helgenberger (CSI) and introduced the world to Natasha Henstridge (THE WHOLE NINE YARDS).

SPECIES: COLLECTOR'S EDITION should be the last copy of the film you will ever need to buy. It boasts a new 4K transfer, a new making-of documentary, all of the extras from previous releases, and new reversible cover art! This Scream Factory title will be available wherever Blu-rays are sold on Tuesday, July 11th! You can order it now from AMAZON, BULLMOOSE, or DIABOLIK DVD! If you order it directly from SHOUT! FACTORY, you will receive the disc two weeks early, and your package will include an 18 x 24 poster featuring the new cover art!