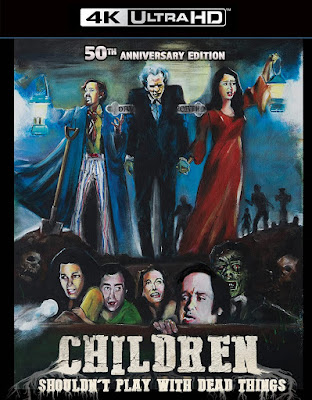 ON NOVEMBER 22ND, YOU CAN WATCH ORVILLE'S "COMING OUT PARTY" IN GLORIOUS ULTRA HIGH-DEFINITION!

Bob Clark had a pretty eclectic career and made films ranging from raunchy teen sex comedies (PORKY'S and PORKY'S II: THE NEXT DAY), to Horror classics (DEATHDREAM and BLACK CHRISTMAS), to Christmas essentials (A CHRISTMAS STORY), to kids movies (BABY GENIUSES), and even gender-bending crime movies (SHE-MAN: A STORY OF FIXATION).

But today we're going to focus on his first true feature-length film, 1972's CHILDREN SHOULDN'T PLAY WITH DEAD THINGS, which is getting a new 50th anniversary Blu-ray and 4K UHD release from VCI in November! While not in my "zombie top ten," I do enjoy this low-budget horror romp and count myself lucky to have seen it in 35mm!

Synopsis: Five young kinky actors and their artistic director come to a desolate and nearly forgotten burial island, complete with a morbid history of MURDER, RAPE, CURSES and DEMONS. Alan (Alan Ormsby), the brilliant but bizarre Director of the company, has brought them to this foreboding place to dabble in witchcraft; specifically to dig up a fresh corpse and use it in a ritual ceremony which is supposed to raise the dead from their graves.

It seems as though Alan has really gathered his "children" here, only to play a practical joke on them and then to party the rest of the night away. However, the joke's on Alan. His bizarre ritual ceremony really does raise the dead from their graves... only they're in no mood to party!

Along with the upgraded picture quality (which I currently cannot confirm is an all new transfer, or a 4K upconversion from the previous 2K transfer they put out in 2016), all of the previous extras are included, but I'm personally excited to check out that new feature-length documentary that's on this disc! Originally slated for release today (10/11/22), VCI pushed back their 50th Anniversary release of CHILDREN SHOULDN'T PLAY WITH DEAD THINGS until November 22nd (ditto for their Region A Blu-ray disc). The upcoming 4K Ultra HD Blu-ray release of CHILDREN should cost between $27 - $30 (though the price may drop before release), and can be pre-ordered now from AMAZON, BULL MOOSE, or DIABOLIK DVD!