A Plague So Pleasant - Available on DVD September 29th! 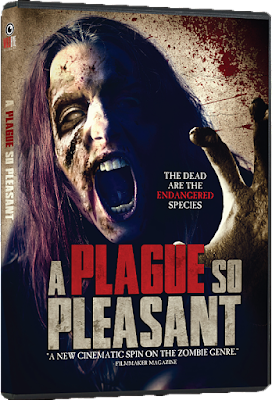 "A PLAGUE SO PLEASANT" INFECTS YOUR DVD COLLECTION THIS SEPTEMBER!

As tired as I am of the zombie sub-genre, I'm kind of curious about this one. Shot on a paltry budget of fourteen-hundred dollars, this new indie zombie flick promises a different experience than your typical undead fare.

Film Synopsis: In the near future, zombies have become a protected, endangered species, held in captivity and legally wandering the streets free from harm by the living.

But for the loved ones of those who die, sometimes coping is just too much to handle, especially when not everyone feels the dead have a right to exist, and are willing to break the law to rid the world of this new population of the dead.

A PLAGUE SO PLEASANT will infect home entertainment systems beginning September 29th (originally August 25th). A more dangerous strain than recent efforts, the film has been hailed by undead aficionados as "a miraculous accomplishment" (Zombie Guide Magazine), "an Excellent, Original Zombie Movie" (ZMDB.com), and "so much better than the average straight to video zombie travesty" (The Rotting Zombie).

Special Features:
Once again, A PLAGUE SO PLEASANT will be released onto DVD on September 29th! You can order yourself a copy now at AMAZON.COM! Check out the trailer below to see if this new micro-budget zombie flick is right for you!