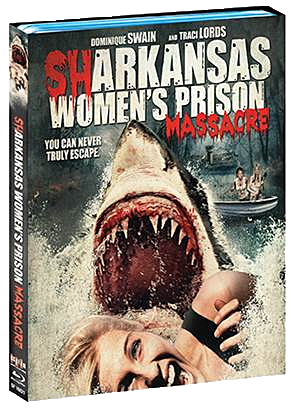 Jim Wynorski, the king of b-movie sequels (RETURN OF SWAMP THING, 976-EVIL 2, GHOULIES IV, SORORITY HOUSE MASSACRE 2, et al.), does some genre-mashing in his latest film. If you ever thought that women in prison films were sorely lacking finned aquatic predators, then this movie is for you!

Film Synopsis: When a fracking mishap accidentally rips apart the earth's crust, the resulting hole opens up a gaping underground waterway leading to a vast and mysterious subterranean ocean somewhere deep below.

Instantly, giant prehistoric sharks begin wending their way upward toward a murky bog in the heart of the Arkansas bayou. Unfortunately for a group of female prisoners on a work detail in the swamp, the deadly sharks attack without warning – pinning a hapless group of potential victims in a small deserted cabin in the heart of the wetlands. For these wayward women, death may be the only means of escape!

Get ready for a wild ride when Dominque Swain (SKIN TRAFFIK, ALPHA DOG) and Traci Lords (CRY BABY, NOT OF THIS EARTH) come face to face with the deadliest prehistoric man-eaters nature has ever spawned. Directed by cult filmmaker Jim Wynorski (CHOPPING MALL, THE RETURN OF SWAMP THING), this high-camp, creature-feature also stars Cindy Lucas (AMERICA PIE PRESENTS: THE BOOK OF LOVE), Christine Nguyen (GET HIM TO THE GREEK), Corey Landis (CHRYSALIS), John Callahan (FALCON CREST) and Amy Holt (DINOCROC VS. SUPERGATOR).

Extras:
Once again, Scream Factory is releasing SHARKANSAS WOMEN'S PRISON MASSACRE on MAY 3RD. You can order directly from SHOUT! FACTORY, or get your copy through AMAZON.COM! Also, please note that more extras may be announced as this disc gets closer to release. If interviews, trailers, and other special features are added to this upcoming title, I'll be sure to update this post.