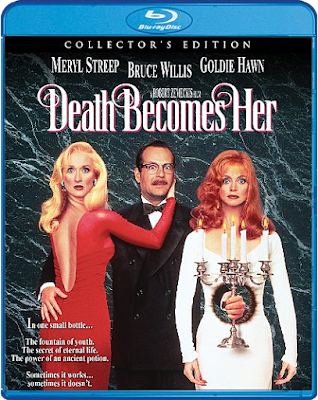 I haven't seen DEATH BECOMES HER in years, but I remember having a blast watching it. Great effects coupled with a fantastic cast and director makes this Scream Factory title a must-own!

Extras:
You can pick up  your copy of DEATH BECOMES HER: COLLECTOR'S EDITION wherever Blu-ray discs are sold on April 26th! Order this title now from AMAZON.COM, or get it directly from SHOUTFACTORY.COM and receive your disc TWO WEEKS EARLY!

Thanks for bringing another forgotten classic to Blu-ray Scream Factory! I can't wait to see this movie again - it's been too long!

Posted by The Vault Master at 2:58 AM