Season one of SLASHER comes to DVD & Blu-ray in July, courtesy of Scream Factory! 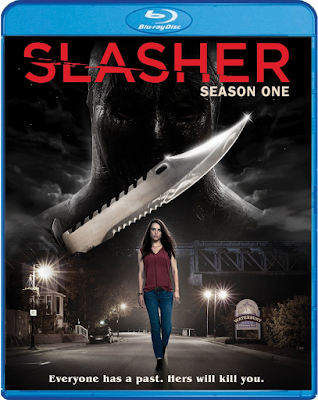 ON JULY 12TH, "THE EXECUTIONER" RETURNS TO WATERBURY IN THIS CHILLER ORIGINAL SERIES!

To be honest, I'm really lukewarm towards Chiller. I was excited when my cable company finally added it to the roster, but I was quickly underwhelmed by this niche channel. Still.... I'm a sucker for slasher films and TV series, so I may give this a go!

TV Series' Synopsis: Thirty years ago, in the sleepy community of Waterbury, a killer known as "The Executioner" murdered Sarah Bennett's parents. Now Sarah (Katie McGrath) and her husband Dylan (Brandon Jay McLaren) have returned to town, only to find herself the centerpiece in a series of horrifying murders centered around the seven deadly sins.

It seems "The Executioner" is back. But if Tom Winston - the original Executioner - is behind bars, who is the new person behind the mask? As the murders escalate, long-buried secrets are revealed, making everyone around Sarah a suspect…or a victim.

Developed and produced by Shaftesbury in association with Super Channel and Chiller, Slasher is written and created by Aaron Martin (Killjoys, Being Erica) and directed by Craig David Wallace (Todd and the Book of Pure Evil). Aaron Martin, Christina Jennings and Scott Garvie are executive producers.

Extras:
Season one of SLASHER will be available on both DVD & Blu-ray, and can be purchased on July 12th wherever discs are sold! If you're interested in this title, you can pre-order it now from AMAZON.COM, or directly from SHOUTFACTORY.COM!