Scream Factory rekindles your obsession for THE CRUSH this June! 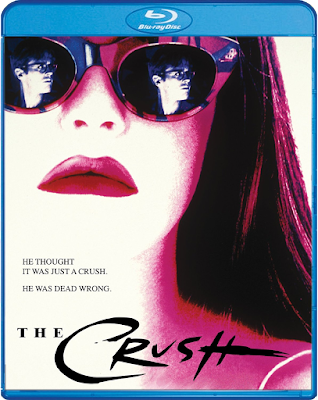 ON JUNE 21ST, SCREAM FACTORY REMINDS US THAT A CRUSH CAN BE KILLER, WITH THE BLU-RAY DEBUT OF ALAN SHAPIRO'S "THE CRUSH!"

Though I am a bit surprised that this film is now part of the growing Scream Factory catalog, I am definitely eager to revisit it. I myself had a crush on Alicia Silverstone back in the day!

Film Synopsis: A man who should know better. A much younger teenager. No way should there be any kind of romance between them. Yet from the moment 14-year-old Adrian met Nick, she was crazy about him. There must be something she can say or do. Some way she can show him this is not just a crush. What can she do? What won't she do?

A captivating tale of obsession and revenge, THE CRUSH stars Cary Elwes and Alicia Silverstone in her breakthrough role. When Nick (Elwes) moves into a garage apartment in a picturesque suburb, his landlady's daughter (Silverstone) takes more than a passing interest in him. Her infatuation turns violent when he rejects her, and she sets out to ruin him, his work and his girlfriend. If she can't have him, no one will.

Extras:
You can order THE CRUSH now from AMAZON.COM or directly from SHOUT! FACTORY, which will net you your CRUSH Blu-ray a full two weeks early!  The disc isn't hitting stores until June 21st, so you do have a little time to mull this decision over. But choose wisely, and beware of blonde lolitas from Aerosmith music videos!

Posted by The Vault Master at 1:29 AM