If You've Got a Taste for Terror... Get CARRIE on 4K UHD on December 13th! 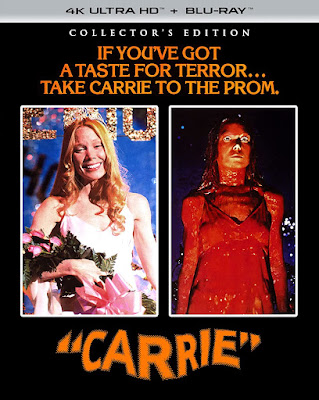 SCREAM FACTORY BRINGS BRIAN DE PALMA'S FANTASTIC ADAPTION OF THE STEPHEN KING NOVEL TO 4K, IN BOTH STANDARD AND STEELBOOK EDITIONS!
Though there's been a sequel, a made-for-TV remake, and a big budget Hollywood reboot, the original 1976 CARRIE is still clearly the best version of the Stephen King tale of a tortured teenage girl that unleashes her telekinetic powers upon those that wronged her. And now CARRIE is the latest Scream Factory double-dip, featuring a new 4k transfer, one new audio commentary, a newspaper ad gallery, plus the plethora of extras from the previous Blu-ray release! If you haven't yet added this movie to your collection, now is the time to do it Vault Dwellers! And if you already do have CARRIE, this seems like a worthy upgrade!

At the center of the terror is Carrie (Spacek), a high school loner with no confidence, no friends ... and no idea about the extent of her secret powers of telekinesis. But when her psychotic mother and sadistic classmates finally go too far, the once-shy teen becomes an unrestrained, vengeance-seeking powerhouse who, with the help of her "special gift," causes all hell to break loose in a famed cinematic frenzy of blood, fire and brimstone! This classic also stars John Travolta (BLOW OUT), Amy Irving (THE FURY), William Katt (HOUSE), and P.J. Soles (HALLOWEEN).
Disc Specs:
DISC ONE
Rated R | Color | 98 minutes | Region Free
Video - 2160p Widescreen (1.85:1)
Audio - English DTS-HD Master Audio: 2.0 Mono & 5.1
DISC TWO
Rated R | Color | 98 minutes | Region A
Video - 1080p Widescreen (1.85:1)
Audio - English DTS-HD Master Audio: 2.0 Mono & 5.1
Extras:
DISC ONE 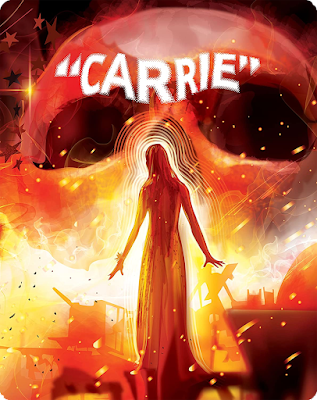 While I haven't been a big fan of Scream Factory's somewhat recent decision to focus on re-releasing titles in new 4K editions, I must admit that the fact that they are using the original theatrical artwork, and adding a few additional bonus features, kind of sweetens the pot. The 3-disc standard Collector's Edition 4K UHD of CARRIE arrives on Tuesday, December 13th and should cost between $28 - $36! You can pre-order it now from AMAZON, BULL MOOSE, DIABOLIK DVD, or directly from SHOUT! FACTORY.

There is also a Limited Edition Steelbook arriving the same day, which will cost somewhere between $30 - $39! That release is also available to order now from AMAZON, DIABOLIK DVD, and SHOUT! FACTORY. (Note: Ordering either the standard or steelbook editions directly from Scream/Shout! will net you a poster!) However, if you're a hardcore CARRIE fan, then you may want to indulge in one of Shout!/Scream Factory's exclusive bundles:
Posted by The Vault Master at 1:10 AM