They Made Her the Perfect Killing Machine... Then They Lost Control! PROGRAMMED TO KILL is Now Available on Blu-ray Disc! 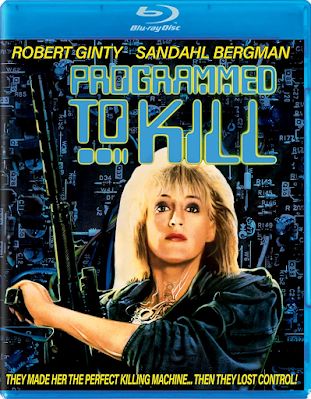 KINO LORBER STUDIO CLASSICS GIVES THIS FORGOTTEN SANDAHL BERGMAN CYBORG ACTIONER ITS BLU-RAY DEBUT!
Honestly Vault Dwellers, I never knew this movie existed until about a month ago, and I'm hoping to get my paws on it sooner rather than later now that Kino Lorber gave it the physical media release it deserves! The trailer definitely makes this one look like its a good time (low IMDB score be damned) and I could totally see myself double-featuring it with EVE OF DESTRUCTION (another killer female-cyborg on-the-loose film that doesn't get nearly enough love)! If you saw this movie once on VHS as a kid and kinda liked it, or never heard of it before (like me) then continue reading to get all the details of this new Blu-ray release!

Synopsis: Captured in a daring raid by ex-CIA agent Eric Mathews (Robert Ginty - THE EXTERMINATOR, EXTERMINATOR 2), the merciless terrorist hit-woman Samira (Sandahl Bergman - CONAN THE BARBARIAN) is brought to the U.S., where she undergoes experimental brain surgery. Transformed into an unstoppable bionic warrior, she returns to the Middle East, where she obediently wipes out all of her former comrades. But when a malfunction reactivates Samira's human memories, she launches into a frenzy of cold-blooded vengeance.

As she methodically terminates her CIA adversaries, only Mathews can halt her murderous onslaught! Directed by Allan Holzman (FORBIDDEN WORLD), PROGRAMMED TO KILL (a.k.a. THE RETALIATOR) is a gripping, futuristic action thriller that also stars James Booth (AVENGING FORCE) and a young Paul Walker (THE FAST & THE FURIOUS franchise). 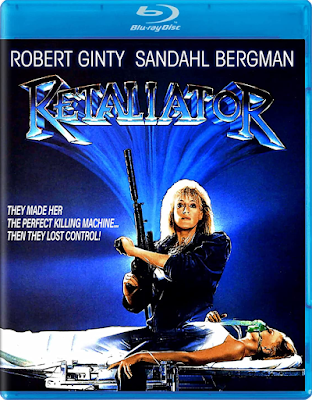 We are truly living in a golden age where almost anything is likely to get a Blu-ray or 4K UHD release, including obscure stuff that vanished after VHS went bust. So even if it isn't all that great (it at least has to be better than R.O.T.O.R., right?) I'm happy to see PROGRAMMED TO KILL getting a second chance at finding an audience over three decades after its theatrical release! Also known as THE RETALIATOR, this sci-fi actioner is currently available on Blu-ray from Kino Lorber Studio Classics and should cost between $15 - $18! Snap up a copy now from AMAZON, BULL MOOSE, DIABOLIK DVD, or get it directly from KINO LORBER!

Posted by The Vault Master at 1:07 AM