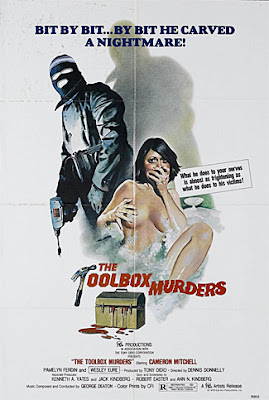 Hudson Horror Show is a major reason why I continue to live and breathe. The bi-annual event brings together hardcore horror and exploitation film fans, and the lineups at each show are to die for. It's a smoothly run film fest that sells out ridiculously fast, and for good reason!

On Saturday, September 19th, Chris Alo and his Hudson Horror crew will be taking over Theater #4 at the immensely awesome ALAMO DRAFTHOUSE in Yonkers, NY. (GET YOUR TICKETS NOW!)

During their last epic team up, The Drafthouse and Hudson Horror Show team brought us a great triple feature of SLEEPAWAY CAMP, THE GIANT SPIDER INVASION, and BLOOD BEACH!

This time around, come to the Drafthouse and we'll crack open a few cold ones and “get hammered” with THE TOOLBOX MURDERS! Starring cult horror icon Cameron Mitchell (BLOOD & BLACK LACE, NIGHTMARE IN WAX), seventies teen heartthrob Wesley Eure (TV’s LAND OF THE LOST) and adult film superstar Kelly Nichols, THE TOOLBOX MURDERS ranks as one of the grimiest horror films ever made.

Originally released in the spring of 1978, this somewhat forgotten slasher preceded both HALLOWEEN and FRIDAY THE 13th and features so many death scenes using tools, that it should have been sponsored by Craftsman!  Forget the 2004 remake by Tobe Hooper, the original film still packs quite a punch in the blood and nudity department and tonally is still creepy as hell and just generally “unsettling.”

In the UK this was one of the original “Video Nasties” which saw the movie banned in England for nearly 20 years. Now you can see it all, back on the big screen and from glorious 35mm film! 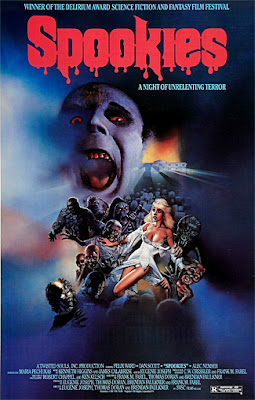 The second feature at the Alamo/Hudson Horror Show team up is an even more obscure title, the completely overlooked and underappreciated monster bash SPOOKIES! Originally lensed in 1984 under the title "Twisted Souls," the original film was unfinished and therefore, never released.

Several years later a second director was brought in, along with an entirely new cast, to shoot new footage to expand the unfinished movie to feature length. With two separate movies, multiple story lines that never intersect and two different casts mashed together, SPOOKIES is completely nonsensical and utterly batshit crazy, but so much fun!

While the title was surely a cash-in on the GREMLINS and GHOULIES craze, this “R” rated monster movie has very little to do with either of the aforementioned films. Featuring zombies, dead girls in coffins, giant spiders, assorted demons, a Grim Reaper, and more, this completely ignored haunted house/creature feature is a dream come true for lovers of old school practical effects!

This movie was barely released theatrically in the United States in 1988 as a mere 17 prints of this movie were struck in 35mm and sent to theaters. Never released on DVD or Blu Ray in the U.S. and practically unseen in theaters. (Though it became a popular staple of late night cable TV!) With one of those rare 17 prints now unearthed, the time has come to bask in the rubber monster madness that is SPOOKIES!

The Hudson Horror at the Alamo double feature will feature the usual trappings of our regular Hudson Horror Show: Classic drive in trailers, trivia questions, giveaways, and of course, some vendors with assorted horror merchandise for sale. Add that to the Alamo’s delicious food, drink specials and film fan friendliness and you have another winning combination.

The show starts at 8:00 PM and tickets are a mere $12 bucks! They are on sale and going FAST! I myself secured tickets just yesterday, and discovered that half the seats are already claimed! So if you are serious about attending, get your butt in gear and order your tickets HERE, before you miss out on this once in a lifetime double feature!

Get your tickets, save the date, and prepare to have your brain melted by these two cinematic oddities! Hopefully I'll see you there!