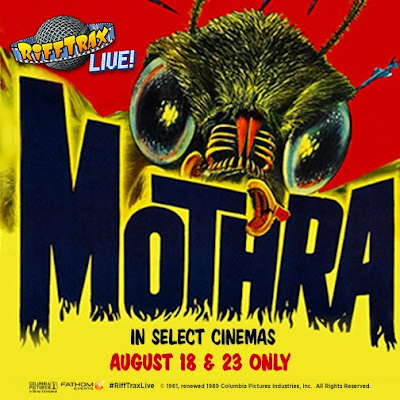 Fans of classic Japanese monster flicks and movie riffing rejoice, for Rifftrax Live battles MOTHRA tomorrow night in theaters across the United States! (With a rebroadcast on August 23rd!) Michael J. Nelson, Bill Corbett, and Kevin Murphy will team up to take jabs at this classic kaiju flick, which features Toho's other famous mon-star!

For the uninitiated, MOTHRA is a 1961 Japanese epic, where explorers investigate the nuked remains of Infant Island. They are startled to find that the island is actually still inhabited, and filled with numerous mutations caused by radiation poisoning. Also, the islanders, led by two tiny priestesses, worship a giant insect god named Mothra!

But when the tiny "Shobijin" are kidnapped and taken back to Japan to be exploited, Mothra hatches from an egg and makes a beeline for the Land of the Rising Sun. The larvae eventually morphs into her final insect form, and destroys everything in her path as she seeks out the "twin fairies." Will the Japanese Self-Defense Forces be able to stop MOTHRA?!

This Rifftrax Live show begins at 8:00 PM EST and will be streaming live to various movie theaters. To find out if it's playing near you, and to snag yourself tickets, CLICK HERE!


Sadly I'm missing out on this show (it sucks that they're always broadcast on Thursdays!), so if any of you Vault Dwellers attend, please let me know how it was. And most definitely share your favorite moments from the film (and your favorite jokes) in the comments below!