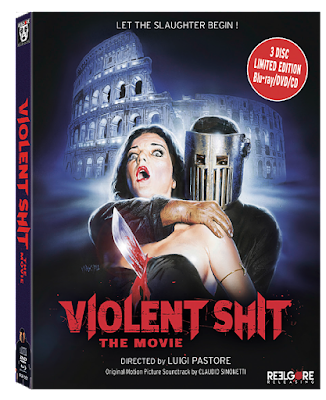 KARL THE BUTCHER WILL BE RESURRECTED ON AUGUST 9TH, IN A COLLECTIBLE 3-DISC LIMITED EDITION COMBO PACK FROM REEL GORE RELEASING!

Well this is something you don't see every day... Andreas Schnaas' VIOLENT SHIT series (comprised of four films ranging from 1989 to 2010) has been reborn thanks to Luigi Pastore, who has co-written and directed this all new Karl the Butcher reboot!

They stumble upon the eccentric Professor Vassago, a master of myths and mysteries, who is linked to Senator Vinci, a corrupt politician. Both are mutually driven by power and perversions. The suspicion grows that these atrocious crimes are connected with the return of one of the most heinous serial killers of our time - Karl the Butcher!

Fangoria says:
“The relentless Karl the Butcher, beloved and best known to gorehounds and German Underground aficionados has been revamped and re-envisioned; his trademark brutality in the likes of the distinctly German independent VIOLENT SHIT now remade into an equally ghastly giallo featuring a Claudio Simonetti soundtrack. VIOLENT SHIT — THE MOVIE is an homage to both the original’s 25th anniversary and the producer’s love of Italian horror and blends German gore movies with the ”mastery of Italian horror.”

VIOLENT SHIT - THE MOVIE's limited (to 3,000) edition will be available on August 9th courtesy of Reel Gore Releasing! If anything, this looks like its worth owning for the Goblin score alone! Scope out the trailer for VIOLENT SHIT below, then order yourself a copy at AMAZON.COM or DiabolikDVD.com today!

Posted by The Vault Master at 2:42 AM