This September, travel to the Frozen Kingdom with a young H.P. Lovecraft! 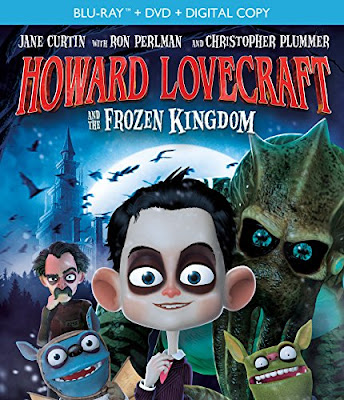 I first reported on the production of this animated film last October, and I can't believe it's about to come out on DVD & Blu-ray! Where does the time go?! I'm a sucker for anything H.P. Lovecraft, so I'll definitely be checking this one out!

Film Synopsis: Before he becomes the famed horror writer H. P. Lovecraft, young Howard Lovecraft is a curious and imaginative boy living with his mother. But after she unwittingly gives Howard the legendary Necronomicon, he is transported to a dangerous and frozen world populated by horrifying creatures. After saving and befriending one such creature – Spot – Howard and his new friend set off on a perilous quest to save the kingdom and get Howard home. But Howard soon finds out that not everything is as it seems and not everyone is to be trusted.

H.P. Lovecraft, famed horror and fantasy writer, was once just Howard Lovecraft, a strange and lonely child. Howard was a boy of infinite imagination and boundless curiosity. His family however was not without peculiarities of their own... This fall, loyal fans and enthusiasts of Lovecraft’s literature are invited to venture into the imaginative Lovecraft universe through the new animated feature HOWARD LOVECRAFT AND THE FROZEN KINGDOM.

A veritable love letter to Lovecraft himself, HOWARD LOVECRAFT AND THE FROZEN KINGDOM is a fantastical movie adventure that entwines new storytelling, actual events of H.P. Lovecraft’s life, iconic elements of his writings and literary characters Cthulhu, Shoggoth, and more!

HOWARD LOVECRAFT AND THE FROZEN KINGDOM hits DVD and Blu-ray on September 27th, and seems like a great way to introduce your children to the creatures and characters from the works of H.P. Lovecraft. You can order it now on AMAZON.COM or directly from SHOUT! FACTORY's website.