For some time now, Reel Cinemas Anthony Wayne Theater has been running a REEL CULT midnight movie series (courtesy of general manager Newt Wallen)! Past screenings have boasted a variety of great titles, such as THE UNDERTAKER AND HIS PALS, BRIDE OF THE MONSTER, SCALPS, and Al Adamson's DRACULA VS. FRANKENSTEIN! 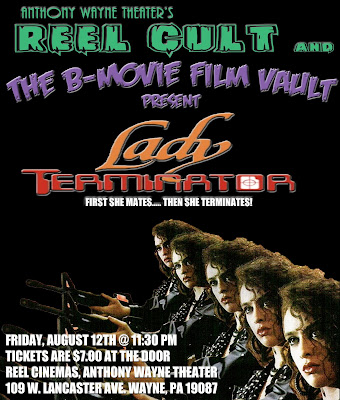 On Friday, August 12th, REEL CULT and yours truly will team up to screen one of the greatest cult oddities ever committed to film: LADY TERMINATOR (aka NASTY HUNTER). This Indonesian rip-off of James Cameron's classic 1984 sci-fi thriller stars Barbara Anne Constable as an anthropologist (:: snicker :: ) studying the legend of the South Seas Queen.

One silent tsunami and animated eel later, the ditzy scientist has suddenly become a weapon of penile mass destruction. Using her ahm... "feminine wiles," and an assault rifle with unlimited ammo, the "Lady Terminator" goes after a rising pop-star that holds the key to her destruction. What results is an all-out assault on the senses, full of scrotal violence, female nudity, explosions, hundreds of squibs, scenes lifted directly from THE TERMINATOR, and a batshit insane ending to cap it all off!

Tickets to this screening are a mere $7.00! Things will kick off at 11:30 PM with some trivia contests and giveaways (I'll be bringing some DVDs, Blu-rays, and posters to offload onto some of the lucky attendees!), a LADY TERMINATOR review video from Cynical Celluloid, and some crazy trailers to get everyone pumped for the main event!

So round up some friends next Friday night Vault Dwellers, and prepare for a night of hilarity, vulgarity, depravity, and complete insanity when LADY TERMINATOR storms the silver screen! If you plan on attending, let us know on Facebook, and hopefully I'll see a bunch of you there!