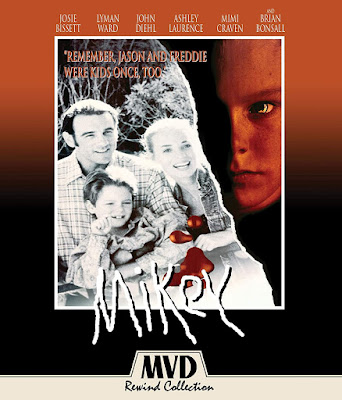 I've never seen MIKEY before (though I recall perusing the VHS cover a few times way back in the day) but I am super stoked to see that SPLIT SECOND (once a candidate for our WANTED ON BLU-RAY column) has finally made the leap to Blu-ray disc! Both films of these blasts from the past have built up a cult following, and gotten a lot of love from MVD Rewind Collection: MIKEY gets a brand new feature-length making-of documentary, while SPLIT SECOND gets a new 4K restoration plus hours of new cast & crew interviews! Want the full details of each? Then keep on reading Vault Dwellers!

Synopsis: Mikey Kelvin (Brian Bonsall - BLANK CHECK, Family Ties) has been a bad boy, only nobody knows exactly how bad. Tragic and deadly "accidents" seem to happen all around Mikey. So, from foster family to foster family and from school to school he goes, leaving a trail of unanswered questions. Of course, everyone knows Mikey is just a sweet, misunderstood little boy. But… remember… Jason and Freddy were once kids too!

From the producers of POINT BREAK comes this cult classic horror film in the tradition of THE GOOD SON with an all-star supporting cast that includes Ashley Laurence (HELLRAISER & HELLBOUND: HELLRAISER II), Josie Bissett (Melrose Place), Mimi Craven (A NIGHTMARE ON ELM STREET), John Diehl (A TIME TO KILL), Whit Hertford (A NIGHTMARE ON ELM STREET 5: THE DREAM CHILD), and Lyman Ward (FERRIS BUELLER'S DAY OFF).

Extras:
MIKEY is now available wherever Blu-ray discs are sold, and should cost between $22 - $35! If you're a fan of this one (like Chad from THE HORROR MOVIE BBQ is) then pick up a copy right now from AMAZON, BULL MOOSE, DIABOLIK DVD, or directly from MVD REWIND COLLECTION'S online store! 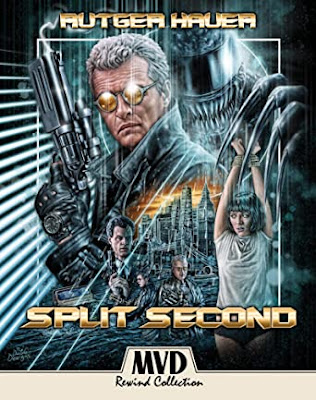 Synopsis: In the year 2008, the cops are better armed than before, but nothing has prepared them for this. Swift, sharp-clawed and deadly, something moves among them on the streets, in the alleyways, on the rooftops, tearing out human hearts and devouring them. Maverick cop ''Harley'' Stone (Rutger Hauer - BLADE RUNNER, BLIND FURY, THE HITCHER) lost his partner to the beast, and now it looks like his girlfriend Michelle (Kim Cattrall - MANNEQUIN, BIG TROUBLE IN LITTLE CHINA) is next on the killer's list.

Even in the future, there aren't guns big enough to stop the creature's deadly force, but Stone has no choice. Teamed with rookie detective Durkin (Alastair Duncan - THE GIRL WITH THE DRAGON TATTOO), Stone must stalk the edge of his own sanity if he is to destroy the rampaging Evil on the outside and banish the very real demons within . . . It could all be over in a SPLIT SECOND.

Featuring special effects by Stephen Norrington (BLADE) and written by Gary Scott Thompson (THE FAST AND THE FURIOUS), along with an all-star supporting cast that includes Academy Award Nominees Michael J. Pollard (TANGO & CASH) and Pete Postlethwaite (INCEPTION), this cult classic sci-fi thriller will have you on the edge of your seat!

Extras:
SPLIT SECOND (featuring the kick-ass artwork of Thomas "The Dude Designs" Hodge) is now available wherever Blu-rays are sold and currently costs between $22 - $40! If you love over-the-top action movies and creature features (and Rutger Hauer!), you'll definitely want to pick up a copy of this one gang! Order SPLIT SECOND now from AMAZON, BULL MOOSE, DIABOLIK DVD, or directly from the MVD SHOP!