TALES FROM THE DARKSIDE: THE MOVIE Comes to Blu-ray on August 25th! 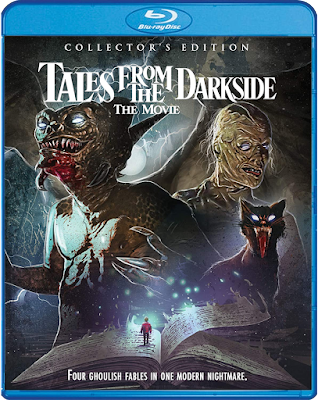 I've always been a big fan of horror anthologies because I've always felt that you get more bang for your buck, and honestly, TALES is probably one of the better ones I've seen! Often eclipsed by the likes of CREEPSHOW, CREEPSHOW 2, TWILIGHT ZONE: THE MOVIE, and BODY BAGS, it's great to see TALES FROM THE DARKSIDE: THE MOVIE finally getting a little love!

All previous archival extras are included in this release (along with new cover art), as are a new audio commentary and a brand new feature-length making-of documentary! (Woohoo!) I'm pretty excited for this release, but I'll have to hold off on picking it up for a bit. But don't let that stop you! If you love horror anthologies and have somehow missed out on this one, then by all means give it a look! For more details on this upcoming Scream Factory title, read on fellow collectors of physical media!

Synopsis: To keep from being eaten by a modern-day witch (Deborah Harry - VIDEODROME), a young paperboy weaves three twisted stories to distract her. In "Lot 249," a vengeful college student (Steve Buscemi - FARGO) resuscitates an evil mummy to teach unsuspecting student bodies (Julianne Moore - KINGSMAN: THE GOLDEN CIRCLE, Christian Slater - THE WIZARD, Mr. Robot) a lesson in terror. Then, "The Cat From Hell" is a furry black feline who cannot be killed … he may have nine lives, but those who cross his path are not so lucky. Finally, in "Lover's Vow," a stone gargoyle comes to life … to commit murder. In this classic cult favorite, fear comes in threes!

Extras:
TALES FROM THE DARKSIDE: THE MOVIE is yet another film that has been rescued from Paramount's vaults by Scream Factory! Here's hoping this trend continues because I have a short-list of movies I'd love to see released over the next year (e.g. EXPLORERS and KING KONG '76). If you're ready to add TALES to your collection you can order now from AMAZON, BULL MOOSE, DIABOLIK DVD, or directly from SHOUT! FACTORY - it should cost between $25 - $28!