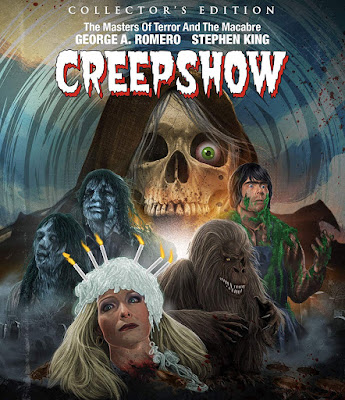 ONE OF THE GREATEST HORROR ANTHOLOGIES OF ALL TIME GETS GETS AN IMPRESSIVE BLU-RAY RELEASE!

When I heard the news of this release my first reaction was bittersweet Vault Dwellers, because all I could think was "Man, Jimmy Harris would've went wild for this!" My pal, the late Doc Terror, adored CREEPSHOW - it was his favorite Horror movie. So I for one will be picking up this new Scream Factory Blu-ray, not just because I enjoy the movie on its own merits, but also because I want to feel some sort of connection to a good friend that was taken from us all far too soon.

Let's take a closer look at this beast of a Blu-ray, shall we?

Synopsis: Five creepy tales are strung together by a framing story involving a young boy being punished by his father for reading the gruesome, titular comic book. "Father's Day" tells the tale of a family patriarch exacting beyond-the-grave revenge on the daughter who murdered him. In "The Lonesome Death of Jordy Verrill," a Maine hayseed is overtaken by a meteor-based plant growth. A cuckolded husband exacts watery revenge on his cheating wife and her lover in "Something to Tide You Over." A hairy beast in a box is used for nefarious purposes at a university in "The Crate." Finally, in "They're Creeping Up on You," a wealthy, arrogant New Yorker with a fear of germs has a disturbing run-in with cockroaches during a blackout.

Extras:
Scream Factory's Collector's Edition of CREEPSHOW is due out on Tuesday, October 23rd and will cost between $35 - $40! While that is a bit pricey, I can't complain too much since the movie has been given a 4K restoration and comes with tons of new extras! Order your copy of CREEPSHOW now from AMAZON, BULLMOOSE, DIABOLIK DVD, or directly from SHOUT! FACTORY.