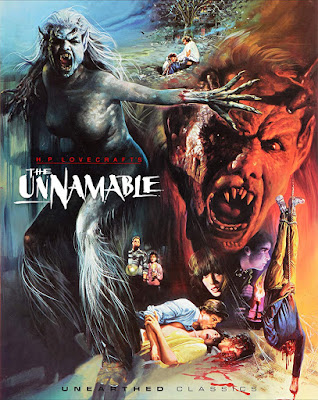 STUDENTS FROM DR. HERBERT WEST'S ALMA MATER ARE ATTACKED BY A DEMON IN THIS OFT-OVERLOOKED H.P. LOVECRAFT HORROR TALE!

I recall seeing THE UNNAMABLE when it came out on VHS back in the day, but I barely remember much about it. (Other than the strange fixation/crush I had on Alyda Winthrop, the film's murderous antagonist from Hell.) I haven't revisited THE UNNAMABLE since then, but when I do, I'm going to make sure I watch Unearthed Films Special Edition Blu-ray!

Synopsis: College students from Miskatonic University who retreat to an early 18th-century mansion for a weekend of lust are stalked by a fatalistic female in this horror film taken from a story by H.P. Lovecraft. The demon delights in tearing the limbs off her human victims to carry out a centuries-old family curse. Bloody graphic violence and nudity is combined with some campy comedy.

Note: The first 2,000 units ordered come with a limited edition slipcover! The artwork is beautiful so hurry up and order a copy now!

Extras:
Unearthed Films' Special Edition Blu-ray of THE UNNAMABLE is currently available wherever discs are sold, and should cost around $20! Order your copy now from AMAZON, BULLMOOSE, and DIABOLIK DVD!