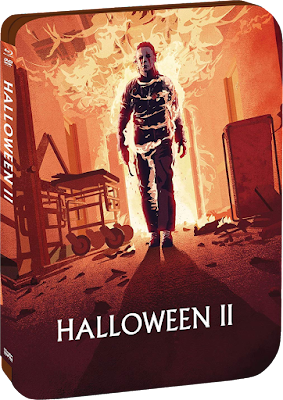 Ugh! Just when you thought you already had the absolute best copies of HALLOWEEN II and HALLOWEEN III in your collection, Scream Factory bursts your bubble with their latest duo of Limited Edition Steelbooks! All of the extras have been ported over from the standard editions we all already own, but now each disc comes with great new cover art and a BRAND NEW 4K transfer of each film! DAMN YOU SCREAM FACTORY! DAAAAMN YOUUUUU!

Synopsis: Picking up exactly where the first film left off, Halloween II follows the same ill-fated characters as they encounter the knife-wielding maniac they left for dead in the first film. But the inhuman Michael Myers is still very much alive and out for more revenge as he stalks the deserted halls of the Haddonfield hospital. As he gets closer to his main target, Dr. Loomis (Donald Pleasence) discovers the chilling mystery behind the crazed psychopath's actions. Written by John Carpenter and Debra Hill, Halloween II is a spine-tingling ride into the scariest night of the year ... more of the night "He" came home.


Extras:
HALLOWEEN II's all new Limited Edition Steelbook is apparently only available from AMAZON at this time (the listing for it has vanished from Shout! Factory's website). CLICK HERE to get your copy now, which will run you about $30! 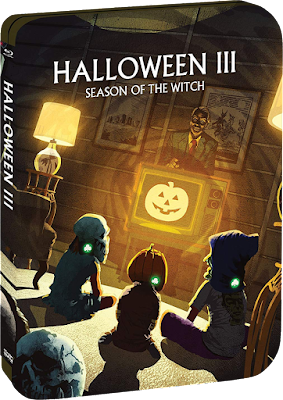 When a terrified toy salesman is mysteriously attacked and brought to the hospital babbling and clutching the year's most popular Halloween costume – an eerie pumpkin mask – Doctor Daniel Challis (Tom Atkins) is thrust into a terrifying Halloween nightmare. Working with the salesman's daughter, Ellie, Daniel traces the mask to the Silver Shamrock Novelties company and its founder, Conal Cochran (Dan O'Herlihy).

Ellie and Daniel uncover Cochran's shocking Halloween plan and must stop him before trick-or-treaters across the country never come home in this terrifying thriller from writer/director Tommy Lee Wallace.

Extras:
Scream Factory's Limited Edition Steelbook of HALLOWEEN III: SEASON OF THE WITCH is now available from AMAZON for about $30! (As was the case with HALLOWEEN II, the listing for III at Shout Factory's site seems to have vanished!) Be sure to get your paws on both releases now because I have a feeling they're going to become quite collectible in the very near future!

Posted by The Vault Master at 1:06 AM