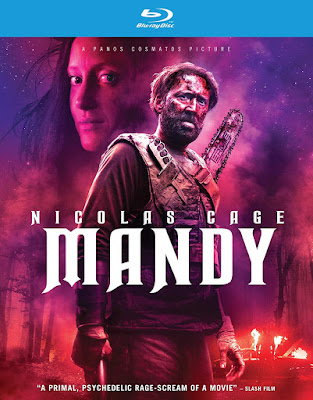 While I didn't love it as much as other folks did, I will say that MANDY is definitely worth a look. It has a dreamlike quality to it, is frequently atmospheric, and a definite step up from the director's previous effort, BEYOND THE BLACK RAINBOW! MANDY has already garnered a devoted cult following after its limited theatrical run and Video on Demand release, and is sure to gain more fans now that it is out on Blu-ray disc!

Synopsis: Pacific Northwest. 1983 AD. Outsiders Red Miller and Mandy Bloom lead a loving and peaceful existence. When their pine-scented haven is savagely destroyed by a cult led by the sadistic Jeremiah Sand, Red is catapulted into a phantasmagoric journey filled with bloody vengeance and laced with fire.

The film was directed by visionary filmmaker Panos Cosmatos (BEYOND THE BLACK RAINBOW) and co-written with first-time screenwriter Aaron Stewart-Ahn. Mandy features the final score of the late renowned Oscar-nominated composer Jóhann Jóhannsson (SICARIO, THE THEORY OF EVERYTHING).

Extras:
MANDY can be obtained wherever Blu-rays are sold, and should cost between $14 - $18! Get your copy now from AMAZON, BULLMOOSE, or DIABOLIK DVD!