On October 30th, Travel Back in Time With Brad Pitt in 12 MONKEYS! 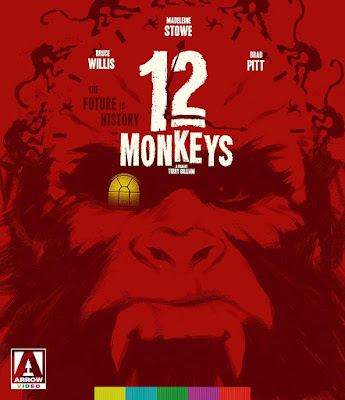 While I have enjoyed many of Terry Gilliam's films (including MONTY PYTHON AND THE HOLY GRAIL, JABBERWOCKY, and THE ADVENTURES OF BARON MUNCHAUSEN) I must admit that I've failed to see 12 MONKEYS since its release back in 1995. It's definitely on my "list" (i.e. an ever-expanding index of films I need to watch), but the opportunity to sit down and watch it has never presented itself. Now it looks like I'll have to remedy that now that Arrow's given this film some much-needed TLC.

Synopsis: Following the commercial and critical success of THE FISHER KING, Terry Gilliam's next feature would turn to science fiction and a screenplay by Janet and David Peoples (BLADE RUNNER, UNFORGIVEN) inspired by Chris Marker's classic short film La Jetée. In 1996, a deadly virus is unleashed by a group calling themselves the "Army of the Twelve Monkeys," destroying much of the world's population and forcing survivors underground.

In 2035, prisoner James Cole (Bruce Willis - DIE HARD) is chosen to go back in time and help scientists in their search for a cure. Featuring an Oscar-nominated turn by Brad Pitt (FIGHT CLUB) as mental patient Jeffrey Goines, 12 MONKEYS would become Gilliam's most successful film and is now widely regarded as a sci-fi classic.

Extras:
Arrow's Collector's Edition of 12 MONKEYS will be available wherever Blu-ray discs are sold on Tuesday, October 30th, and should cost between $26 - $28! You can order a copy now from AMAZON, BULLMOOSE, or DIABOLIK DVD!