Enter the Deadly World of Cosmetics With Scream Factory's New Blu-ray of THE WASP WOMAN! 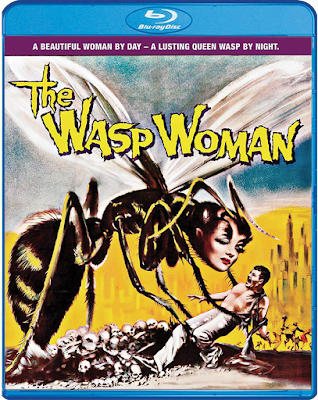 Though I've owned THE WASP WOMAN for decades (it's on one of the many bargain-bin DVD sets I've procured over the years) I've never actually sat down and watched it. That may be about to change now that Scream Factory has unleashed their new Blu-ray of the film that contains TWO versions of THE WASP WOMAN, plus new extras!

Synopsis: Roger Corman, king of the cult classics produced and directed this cult classic, and even makes an uncredited appearance as a doctor in the film. Susan Cabot (SORORITY GIRL) plays Janice Starlin, whose cosmetic company has started to lose sales because its marketing relies on her own once-impressive but now aging beauty.

The eccentric Dr. Eric Zinthrop (Michael Mark) develops an enzyme extract from royal wasp jelly, which rejuvenates Janice, with one tiny little side effect: It turns her into a monster! Written by frequent Corman collaborator Leo Gordon (THE TERROR, THE TOWER OF LONDON), this chiller co-stars Anthony Eisley (THE NAKED KISS) and Barboura Morris (A BUCKET OF BLOOD).

Extras:
THE WASP WOMAN is now available on Blu-ray and costs between $23 - $28! Order your copy of this Corman classic now from AMAZON, BULLMOOSE, DIABOLIK DVD, or directly from SHOUT! FACTORY.