Warner Archive Unleashes DRACULA A.D. 1972 and THE SATANIC RITES OF DRACULA onto Blu-ray! 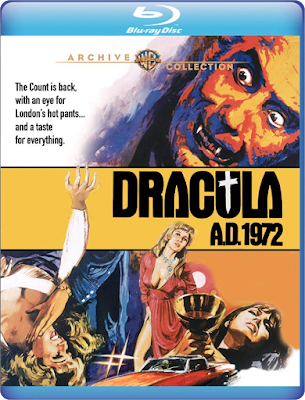 It's been a long time since I've laid eyes upon THE SATANIC RITES OF DRACULA so I can't really comment on that film. However, DRACULA A.D. 1972 is fresher in my mind, and while it's not one of my fave Hammer titles, it's still a pretty solid movie. Though it sort of peaks with the duel between Dracula and Van Helsing at the beginning of the film, there's plenty of eye candy (e.g. Caroline Munro!) to keep your interest in this one!

Synopsis: London’s become a small town for a handful of jaded psychedelic-era hipsters. But Johnny Alucard has a groovy new way for his pals to get their kicks. A certain ritual will be the living end, he insists. And if you still wonder where Johnny’s coming from, try spelling his last name backwards. Dracula is raised into the modern era in this Hammer Studios shocker that’s “quite well done” (John Stanley, Creature Features).

Christopher Lee dons the cape for the sixth time and seeks out fresh victims. As archnemesis Van Helsing, fellow horror legend Peter Cushing clutches a vial of holy water and edges within throwing distance. Their harrowing battle royale is not to be missed. In fact, it’s the living end!

Extras:
While I'm happy to see this film get an all new transfer, I'm disappointed in the lack of extras (Yeesh, not even a trailer?), even more so because this disc is going for $19 - $22! While I'd suggest waiting for a price drop, if you simply must add this Hammer title to your collection, you can order it now from AMAZON, BULLMOOSE, or DIABOLIK DVD! 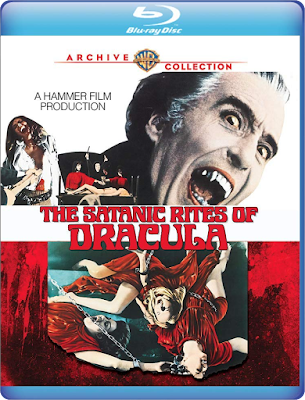 Synopsis: A dying man’s report of a ritual black mass stirs Britain’s security chief into action, and a mansion filled with young vampire girls is soon discovered. And this is but the first twist in a labyrinth of horror. Peter Cushing and Christopher Lee pair up for the final Hammer Dracula in this follow-up to Dracula A.D. 1972.

In this go-round, the Count (Christopher Lee, naturally) follows a more pulpish, super-villainous playbook, posing as a millionaire industrialist alive and well and living in London while secretly brewing up a batch of super-plague in a quest to destroy the world.

Mixing Satanists, spies and sci-fi, the film makes viewers glad that Peter Cushing is on hand to solidly anchor the more outré elements as the effortlessly expositioning Dr. Van Helsing. Lee, in turn, has more dialogue as Dracula than was the norm, and ratchets up the evil to the nth degree. Joanna Lumley (Absolutely Fabulous) costars. Also known as COUNT DRACULA AND HIS VAMPIRE BRIDE.

Extras:
Just like DRACULA A.D. 1972, this Hammer title boasts a new HD remaster, but lacks any special features, and also goes for $19 - $22. You can order THE SATANIC RITES OF DRACULA now from AMAZON, BULLMOOSE, or DIABOLIK DVD, and receive it on November 13th!