Learn Who Made Who With Vestron Collector's Series' New Blu-ray of MAXIMUM OVERDRIVE! 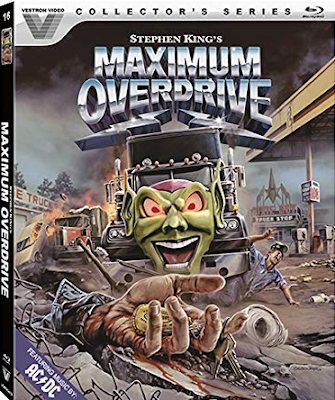 LONG OUT OF PRINT, STEPHEN KING'S SOLO DIRECTORIAL EFFORT FINALLY MAKES ITS WAY TO BLU-RAY IN THIS DELUXE VESTRON RELEASE!

MAXIMUM OVERDRIVE may not be the greatest thing to bear Stephen King's name, but the film does have two things going for it: It's the ONLY movie ever directed by King (who was on a steady diet of cocaine at the time) and the only film (to my knowledge) that has an all AC/DC soundtrack. For years, this bad boy was only available on VHS or DVD, but Stephen King's ridiculous tale of mankind's machines retaliating against their creators is finally getting the love it deserves!

Synopsis: Get ready for the ultimate battle of man vs. bloodthirsty machine in this terrifying Stephen King classic! For three horrifying days, the Earth passes through the tail of a mysterious comet. The skies glow an eerie green as humanity waits to see what the fallout will be. But what they imagine is nothing like the nightmare the find - the comet's magnetic fields cause all the machines on Earth to suddenly come to life and terrorize their human creators in a horrific killing spree. Now, it's up to a small group of people trapped in a desolate truck stop to defeat the killer machines - or be killed by them!

Extras:
Though Stephen King and Emilio Estevez are noticeably absent from the special features, that is still an impressive number of new extras for this release! MAXIMUM OVERDRIVE is now available wherever Blu-ray discs are sold and currently seems to go for $35 - $40! (Ouch! That is super expensive - unless you've got money to burn, you may want to hold off on buying this one for a while Vault Dwellers!) Order your copy now from AMAZON, BULLMOOSE, or DIABOLIK DVD!