Yowza! North American labels have been bombarding us with tons of new titles this month already, and our friends in Australia are upping the ante as well! This month, Umbrella brings the first three HELLRAISER films to Blu-ray (as if you didn't own them in some format already), and gives NEXT OF KIN a deluxe release under their Ozploitation Classics line with a new 4K transfer, and loads of extras!

Umbrella's Beyond Genres label continues to shine with their latest addition of THE QUIET EARTH, which has just received a new HD restoration, and newer genre fare comes to DVD, including OUIJA HOUSE and LOST GULLY ROAD. To find out more about the titles I've just mentioned, and to see the list of Umbrella's other new October titles, continue onward!

ANNOUNCEMENTS:
* Umbrella's got a lot of cool stuff coming out on November 11th including: SINGLE WHITE FEMALE (which is also coming from Scream Factory on November 13th here in the States), EMMANUELLE 2 (on DVD & Double Feature Blu-ray), HEAVEN'S BURNING, CHAIN REACTION, LUNATICS: A LOVE STORY, and DEVIL'S GATE.

* Also due out on November 11th is Umbrella's Ultimate Edition of George A. Romero's DAY OF THE DEAD. Though I already own the Anchor Bay and Scream Factory releases of this title, I have to admit that the Umbrella release is pretty tempting. I'm guessing this release uses the same audio and video from previous Blu-ray releases, and is loaded with special features!

* Umbrella has announced a handful of their December titles, but the one that stands out for me is FROG DREAMING, which has been described as a GOONIES-style children's adventure film, about a pair of kids that go on a journey to seek a legendary aquatic creature. 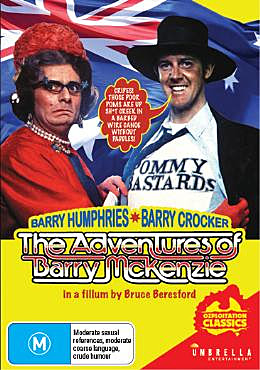 THE ADVENTURES OF BARRY MCKENZIE (1972)

Synopsis: Reviled by the critics! Adored by fair-dinkum Aussies! In this fan-bloody-tastic classic, Australia's favourite wild colonial boy, Barry McKenzie, journeys to the old country accompanied by his Aunt Edna Everage to take a Captain Cook and further his cultural and intellectual education.

Faster than a rat up a drainpipe, Bazza heads for Earls Court to catch up with a bonzer bunch of ex-pat bastards - and from there rampages through London, cracking tubes, parking the tiger, pointing percy, flashing the nasty, and handing out knuckle-sandwiches to the unsuspecting Poms - who wouldn't even know a tram was up 'em 'till the bell rang!


ORDER THE ADVENTURES OF BARRY MCKENZIE ON DVD FROM UMBRELLA ENTERTAINMENT! 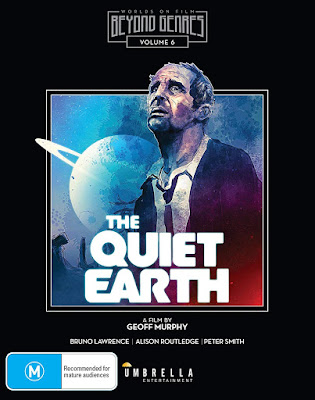 Synopsis: Scientist Zac Hobson (a powerhouse performance by Bruno Lawrence of Frontline) awakens to discover that he may be the last man on earth. Homes, highways and entire cities are deserted, every living thing has disappeared. Frustrated and plagued by megalomaniacal visions, Zac stands on a balcony and grandly addresses an 'audience' of cardboard standups (from Queen Elizabeth to Bob Marley), declaring himself "President of this quiet Earth."

But Hobson soon finds he may not be alone.
Receiving huge critical acclaim, and winning of 8 New Zealand Film Awards, this compelling sci-fi thriller has been rightly compared to the Twilight Zone for its chilling portrayal of a barren, post-apocalyptic world from which there is only one means of escape.

ORDER THE QUIET EARTH ON BLU-RAY FROM UMBRELLA ENTERTAINMENT OR AMAZON.COM! 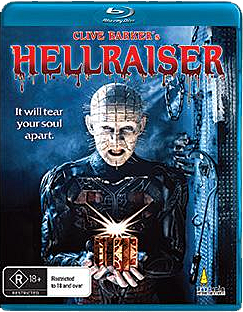 Synopsis: Prepare to travel beyond dreams and nightmares, into the realm of darkness and the furnaces of Hell as imagined by celebrated maestro of the macabre, Clive Barker. When journeyman Frank (Sean Chapman) purchases a mysterious Chinese puzzle box while visiting an exotic country he returns home to England and unwittingly unlocks a door to hell, dragged into a frightening dimension whose evil inhabitants, known as Cenobites, test his appetite for pleasure and tolerance for pain – literally tearing him apart in the process.

Escaping his sado-masochistic hell, Frank returns to his old household and begins an insidious resurrection that will not only draw the life and soul of everyone around him but open a portal for Pinhead (Doug Bradley) and his infernal Cenobites to wreak bloody havoc on an unsuspecting world. A gothic masterwork, HELLRAISER is the original cult visceral descent into the depths of the darkest mind. 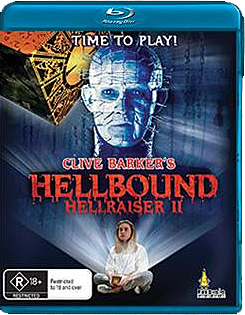 Synopsis: "What is your pleasure, sir?" So echoes the evil enticement of Clive Barker's continuing blood stained pathway through the realm of darkness and into the furnaces of Hell. Following on from the original nightmare, young heroine Kirsty (Ashley Laurence) is institutionalised, battling with the unspeakable horror that destroyed her family. When investigating police uncover a blood soaked mattress, her occult-obsessive psychiatrist Dr Channard (Kenneth Cranham) becomes drawn to the intrigue - raising the ghoulish remains of Kirsty's murderous stepmother, Julia (Clare Higgins) in the process.
"I AM IN HELL. HELP ME!”

Simultaneously lured by shady Uncle Frank (Sean Chapman) and haunted by visions of her mutilated father suffering in hell, Kirsty is persuaded by Dr Channard and puzzle solving mute Tiffany (Imogen Boorman) to venture forth and rescue him from the Cenobites' torturous dimension. Gaining expert access to the portal, together they make the nightmarish journey through the labyrinth of hell. Entranced by the notorious Lament Configuration puzzle box, their death-defying partnership is destined to not only capture the attention of the blood-thirsty Cenobites but release Pinhead's (Doug Bradley) infinite horrors and the ultimate pleasures of Hell. 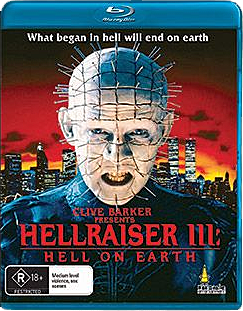 Synopsis: "There is no good. There is no evil. There is only flesh." A nightclubber is dragged into an emergency room, trailing bloody chains hooked through his skin. When his body is torn as if by an invisible hand, a young television reporter, Joey Summerskill (Terry Farrell) witnesses the horrific event. Smart and ambitious, Joey sees this as a breakthrough story and tracks the victim's girlfriend, Terri (Paula Marshall), to a trendy nightclub called The Boiler Room.

Terri reveals that the chains emerged from a small puzzle box, which is linked to a mysterious, intricately carved pillar that is the possession of hedonist nightclub owner, J.P. Monroe (Kevin Bernhardt). Contained within the pillar, Pinhead (Doug Bradley) seeks to free himself from the sculpture and harvest human souls. When J.P. accidentally spills a few drops of blood on the pillar, he releases the imprisoned soul of Pinhead and unleashes hell on earth! 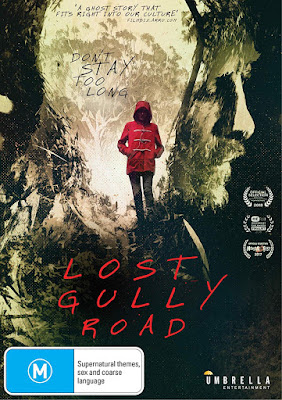 Synopsis: LOST GULLY ROAD tells the story of Lucy, a directionless young woman who travels to a secluded cottage in the forest to wait for her sister.

With no television and little communication to the outside world she spends her days alone and drinking to pass the time. That is, until her unexpected host decides to keep her company… 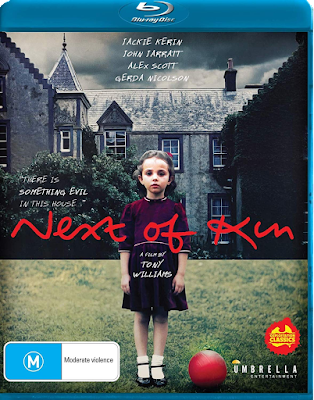 All night she hears a voice that whispers slowly from somewhere deep in the back of her mind. Taps turn themselves on and off. Candles light without a flame being put to them, And just last night she found the corpse of an old man in her bath.

The house is called Montclare and something evil lives there.

For the first time, Umbrella Entertainment presents Tony Williams’ NEXT OF KIN, remastered in 4K from the original 35mm interpositive and with a new 5.1 audio mix of the pulsing synth score by German electronic music pioneer, Klaus Schulze. With superb cinematography by the late Gary Hansen, NEXT OF KIN evokes the style and atmosphere of classic European horror and features a cast of Ozploitation veterans including John Jarratt, Alex Scott and Gerda Nicholson. 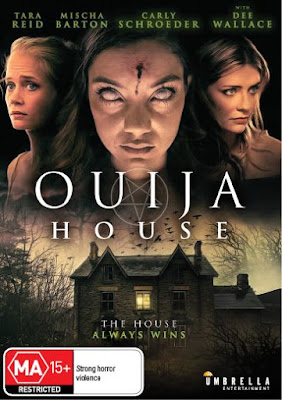 Synopsis: Thirty years ago, a young woman (Tara Reid - SHARKNADO, AMERICAN PIE) plays a Ouija board at a mysterious house with friends. She barely escapes with her life. Now, in present-day, Laurie (Carly Schroeder - FIREWALL, MEAN CREEK) is a graduate student researching a project on the paranormal. Her mother (Dee Wallace - E.T., CUJO, THE HOWLING) is losing her house to foreclosure and is worried about Laurie's interest in the occult, knowing that something happened years ago to affect their family.

Trying to help her mother's financial situation with an impending book deal for her research project, Laurie convinces her boyfriend and their friends to go with her to the family's old secluded house, where terrible events once happened. Arriving at the house, they are greeted by Laurie's cousin Samantha (Mischa Barton, The O.C., THE SIXTH SENSE), who gives them the dark history of the house. The group plays with a Ouija board and unwittingly summon the spirit of Roka, an evil warlock who had years ago killed villagers and sacrificed their children. Things take an even more sinister turn when Tina is possessed by Roka and begins revealing the house for what it truly is - a huge puzzle designed to keep Roka's spirit caged. As night falls and true evil is revealed, Laurie and her friends must figure out a way to stop Roka before it's too late.

ORDER OUIJA HOUSE ON DVD FROM UMBRELLA ENTERTAINMENT OR AMAZON.COM!

Posted by The Vault Master at 8:32 PM