Listen Up You Primitive Screwheads: On October 16th, You Can Own the Complete Misadventures of Ashley J. Williams! 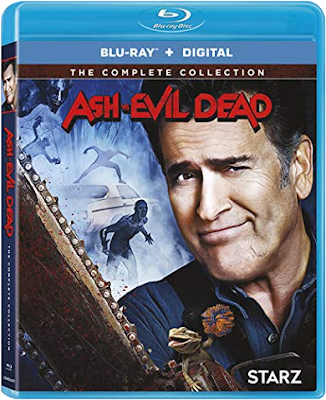 STARZ/ANCHOR BAY RELEASES "ASH VS. EVIL DEAD" IN ITS ENTIRETY ON DVD AND BLU-RAY!

Sigh.... Ash vs. Evil Dead was better than it had any right to be, and wrapped after three groovy seasons due to poor ratings. If you've missed out on the show during it's initial run, and have haven't yet purchased any of its three seasons, the time has finally come to add this madcap finale to Sam Raimi's EVIL DEAD franchise to your personal collection!

Synopsis: Ash Williams (Bruce Campbell), the chainsaw-wielding, wisecracking antihero of the legendary EVIL DEAD films, is back for more gore-filled adventure in this complete 30-episode collection of the Ash vs. Evil Dead TV series! Follow Ash's journey as he returns home to Elk Grove, Michigan, meets his long-lost daughter, and unites with former enemy Ruby (Lucy Lawless) and fellow demon fighters Pablo (Ray Santiago) and Kelly (Dana DeLorenzo) for a final blood-splattering stand to save the world!

SEASON THREE
THE COMPLETE ASH VS. EVIL DEAD comes to DVD & Blu-ray on Tuesday, October 16th and costs between $32 - $45 on Blu-ray, and between $30 - $35 on DVD! Order this "kick-Ash" TV series now from AMAZON or BULLMOOSE! In the meantime, you may want to revisit the EVIL DEAD trilogy while you wait for a quick refresher!