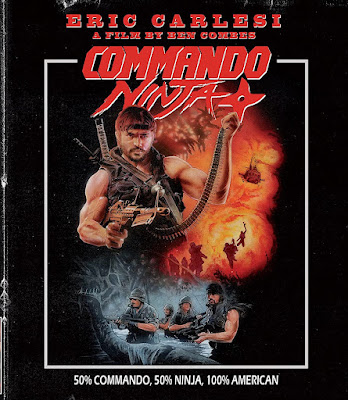 With the success of several no-budget proof of concept trailers-turned hit indie films like KUNG FURY and TURBO KID, it was no surprise that other indie filmmakers would be inspired to do their own over-the-top takes on 80s action fare as well! Case in point, Ben Combes' 2018 fan favorite: COMMANDO NINJA! Available for free on YouTube for years (so you can try before you buy!), this irreverent love letter to films like KICKBOXER, COMMANDO, RAMBO: FIRST BLOOD PART II, and others arrives on Blu-ray disc for the first time with some really cool bonus features!

Synopsis: 1986: John Hunter is a Vietnam veteran, half commando, half ninja, 100% American. He is forced back into action when his young daughter is kidnapped by a secret ninja organization, led by a Central American dictator who wants to create a new world order through time... Unfortunately for them, she is the only thing he would kill again for. Hunter will have to fight his way through an army of ninjas, vietcongs, punks, dinosaurs, mutants, one of his former commandos and a fully equipped private army. With the help of his old friend Hopkins, Hunter will have to combine the arts of ninjutsu and guerilla warfare to become the ultimate soldier and rescue his daughter.

COMMANDO NINJA is now available from Vinegar Syndrome's partner label ETR Media! The disc should cost between $20 - $28 and you can order it now from AMAZON, BULL MOOSE, DIABOLIK DVD, or directly from VINEGAR SYNDROME (which will also net you a limited edition slipcover if you act now)!

Posted by The Vault Master at 2:10 PM