They're Out For Blood - Don't Let Them Find You! ALONE IN THE DARK Arrives on Blu-ray Disc on September 14th! 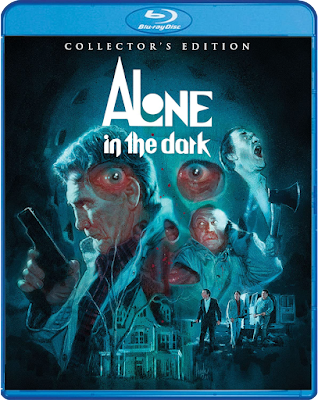 UPDATE: Due to supply chain issues, there is a delay with this release. The discs have been manufactured but have not yet arrived at Scream/Shout! Factory HQ, or other retailers. Orders of this title will be filled once the Blu-rays arrive!

I've been a longtime fan of ALONE IN THE DARK - it has a fantastic cast, and a great premise! Martin Landau and Jack Palance often steal the show, and Donald Pleasance's role is an unexpectedly fun departure from his previous work in the HALLOWEEN series. Though ALONE IN THE DARK has languished in limbo for well over a decade, I am pleased to announce that for those of us that were lucky to acquire a copy of the 2005 Special Edition DVD, the time has finally come to upgrade!

As prophesied two years ago by yours truly in a certain Wanted on Blu-ray post, ALONE IN THE DARK is about to be released by Scream Factory with new (reversible) artwork, a new 2K transfer, and a variety of new and archival bonus features! I don't know about you Vault Dwellers, but I am absolutely stoked to receive my copy in the mail next week!

Synopsis: At a secluded mental institution, electricity fuels the hi-tech security system that keeps the nearby neighborhoods safe from deviant menaces like Frank Hawkes (Jack Palance - BATMAN, WITHOUT WARNING) and "Preacher" (Martin Landau - ED WOOD, THE BEING). Dr. Bain (HALLOWEEN's Donald Pleasence) maintains strict order while a new doctor, Dan Potter (The A-Team's Dwight Schultz), arrives in town with his family. But the inmates don't take kindly to Potter's presence and believe he has killed off their former therapist. Suddenly, a power outage leaves the town in chaos ... and now the maniacs are free to roam the streets and hunt down the man they believe has invaded their lives.

With the area quickly descending into riots and chaos, the innocent few must fight for their lives when they're left terrified, cornered and ALONE IN THE DARK! One of the most memorable and terrifying cult horror films of the 1980s, this white-knuckle shocker from director Jack Sholder (A NIGHTMARE ON ELM STREET 2: FREDDY'S REVENGE, THE HIDDEN) features gory make-up effects from Tom Brumberger (DON'T GO IN THE HOUSE) and Tom Savini (FRIDAY THE 13TH), delivering one seat-jumping scare after another, along with a thick slab of pitch-black humor!

Scream Factory's Collector's Edition of ALONE IN THE DARK will be available on Tuesday, September 14th, and should cost between $26 - $30! If you're a fan of 80s Horror, then make sure you add this title to your collection by ordering a copy today from AMAZON, BULL MOOSE, or directly from SHOUT! FACTORY (which will also net you an 18" x 24" poster)!