Scream Factory Films to kick off with a FENDER BENDER in 2016! 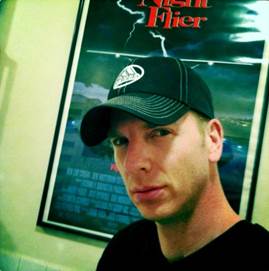 For some time now, Shout! and Scream Factory have been doing fans of genre cinema a real service! They have put so much effort and love into a variety of classic (and obscure) Horror, Sci-Fi, Cult, and Exploitation titles, and they've even begun releasing some titles theatrically. (e.g. BLOODSUCKING BASTARDS)

So it comes as no surprise that they are now looking into creating their own filmmaking label! To kickstart SCREAM FACTORY FILMS, the fledgling production company has chosen their first project: FENDER BENDER.

Written by Mark Pavia (director of THE NIGHT FLIER), this new Horror film is currently in pre-production, with a planned release sometime next year. This is a rather surprising move because Pavia kind of dropped off of everyone's radar after his Stephen King adaptation premiered in 1998. Also, details are pretty scarce about what this film is about, but from the title and hints dropped by Pavia, it seems like it might be a "road trip gone wrong" type of movie.

Both Pavia and the producers that are backing the film are championing FENDER BENDER as a return to classic 80s-style Horror, so it's got my interest. Hopefully I'll find out more soon, so we can all get an idea of what we can expect.

UPDATE (11/13/2015): The studios have confirmed that principal photography on FENDER BENDER began a week ago in Albuquerque, New Mexico!

They also announced the cast, which is made up of Makenzie Vega (THE GOOD WIFE), Dre Davis (PRETTY LITTLE LIARS, SCAVENGER KILLERS), Cassidy Freeman (SMALLVILLE, LONGMIRE), Steven Michael Quezada (BREAKING BAD, ELEMENT) and Bill Sage (AMERICAN PSYCHO, WE ARE WHAT WE ARE).

Posted by The Vault Master at 3:21 AM