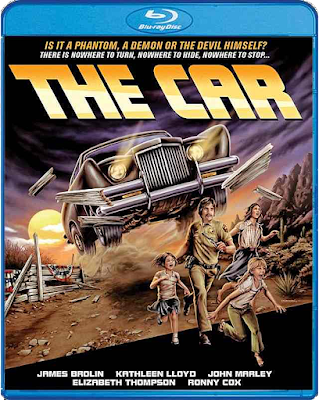 THE CAR is a personal favorite of mine, and I'm very much looking forward to picking up this release from Scream Factory. The new cover art alone has me excited!

Film synopsis: The peaceful tranquility of a small Western town is disturbed when a murderous car wreaks havoc by viciously mowing down innocent victims. The new sheriff, Wade Parent (James Brolin), may be the only one who can stop this menace in its tracks.

But what Wade Parent doesn't realize is that the driver of this indestructible vehicle is far more dangerous than any man... because it is driven by pure evil.

THE CAR will be available wherever discs are sold on December 15th! You can order it now from AMAZON.COM or buy it directly from SHOUT! FACTORY's online store! If you choose the latter, you will receive the Blu-ray TWO-WEEKS EARLY with a COLLECTIBLE POSTER featuring this release's new artwork!