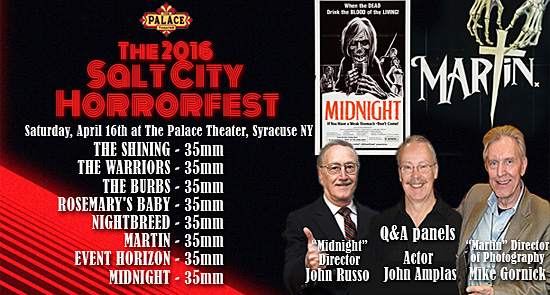 On Saturday, April 16th, 2016, at 11:00 AM, THE SALT CITY HORROR FEST returns to The Palace Theater in Syracuse, NY! Tickets are now available for pre-order HERE for $21.50 each ($3.50 less than what you'd pay at the door!) which guarantees you entry into this awesome show, AND enters you into a raffle for movie posters and other cool prizes!

The venue sells booze (wine & beer!), there will be numerous vendors peddling their wares, and most importantly, there's a pretty solid lineup of 35mm prints being screened as well! Here is the current list of films (and special guests) that are scheduled for this event. Titles, roster, and start times may be subject to change:

So save the date Horror fans, and buy your tickets! Then prepare for a crazy day of gang violence, Satanic cults, demons, killers, vampires, and monsters! And hopefully I'll see ya there!