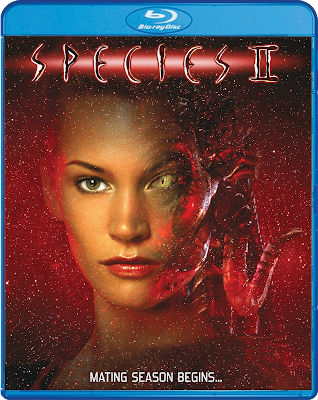 SPECIES is a pretty solid sci-fi thriller, and honestly I've failed to see the sequels it generated. But in a few weeks, I can remedy that by picking up these new Scream Factory releases!

Synopsis for SPECIES II: Having just returned from a mission to Mars, Commander Ross (Justin Lazard) isn't exactly himself. He's slowly becoming a terrifying alien entity with a one-track mind – to procreate with human women!

When countless women suffer gruesome deaths after bearing half-alien offspring, scientist Laura Baker and hired assassin Press Lennox (Michael Madsen) use Eve (Natasha Henstridge, SPECIES), a more tempered alien clone, to find Ross and his virulent brood. But they underestimate Eve's maternal drive, and before long she escapes to mate with Ross in order to create a purer and unstoppable race that could spell doom for mankind.

As time is running out, the ultimate battle takes place in a chilling climax that puts Darwin's theory to the ultimate test... only the strongest species will survive. 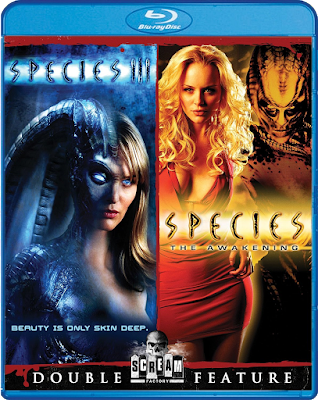 Synopsis for SPECIES III: In the ongoing fight for supremacy between mankind and human-alien hybrids, a fatal weakness among the hybrids has given humans the advantage… until now. When Sara (Sunny Mabrey), the daughter of Eve (Natasha Henstridge, SPECIES), is born, she develops into the most genetically perfect alien form yet!

Seeking to repopulate Earth with her kind, this dangerously beautiful femme fatale heeds an overwhelming drive to mate... while a crack military team trails her in an attempt to end the war between the two species forever!

Synopsis for SPECIES: THE AWAKENING: When brilliant college professor Miranda Hollander (Helena Mattsson, AMERICAN HORROR STORY) suffers a mysterious blackout and awakens amid the bloody aftermath of a mass slaughter, she turns to her uncle for answers. But when he reveals the shocking truth...that she's only half human, a clone from a hybrid of human and alien DNA, they must flee to Mexico to locate the scientist who created her.

Soon they find themselves locked in battle with a horde of rampaging, unstoppable hybrids... and time is running out before Miranda will inevitably surrender to the killer instinct that lurks inside her own body!

Extras:
SPECIES II and the double feature of SPECIES III and SPECIES: THE AWAKENING will be available wherever discs are sold on March 8th! You can order them now from AMAZON.COM (HERE and HERE) or directly from SHOUTFACTORY.COM (HERE and HERE). And, as usual, if you order from Shout!, you will receive your Blu-rays TWO WEEKS EARLY!

I suppose all that's left to do now is order the original SPECIES (HERE), then wait a few weeks to have an epic marathon!

Posted by The Vault Master at 1:30 AM