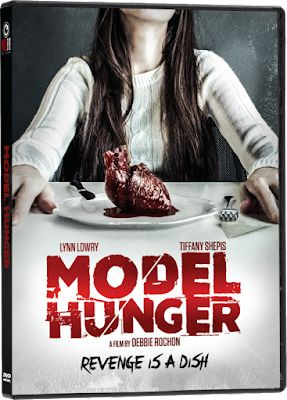 Debbie Rochon is awesome! Having met her just once, she made a huge impression on yours truly, and I'm happy to see that she has jumped behind the camera for a change! I am definitely looking forward to watching her directorial debut when it's released next month!

Film Synopsis: Former pinup model Ginny (Lowry) had been cast aside by the heartless and exploitative modeling industry. Ginny didn't take rejection well and grew into a revenge-seeking, bloodthirsty, broken woman. When her new neighbors Debbie (Shepis) and Sal (Capobianco) move in, Debbie begins to notice strange things going on.

Sal believes she is mentally unstable, but Debbie becomes determined to figure out what secret life Ginny is leading. Her new nosy neighbor throws a damper on Ginny's private life: Her cannibalistic addictions and ever-growing body count. Both women become determined to put an end to the other's obsession.

After nearly 300 films, Rochon (RETURN TO NUKE 'EM HIGH, PHOBIA, THE THEATER BIZARRE) steps behind the camera to skewer audiences with her blood-curling take on an actress' response to forced retirement. She brings with her composer Harry Manfredini (The FRIDAY THE 13TH franchise) and a cast of genre favorites.

DVD Extras:
MODEL HUNGER is available to order now wherever discs are sold (like AMAZON.COM), and will be available on July 12th! If you're sick of the same old boring possession flicks at your local cineplex, then grab a copy of this (or watch it on VOD) and support independent Horror!