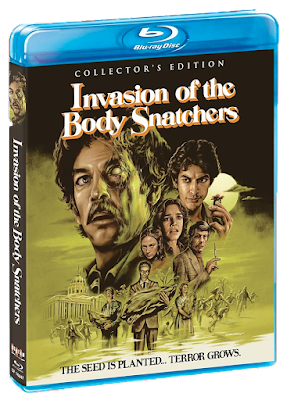 JOIN THE SCREAM FACTORY HIVEMIND WHEN YOU PICK UP PHILIP KAUFMAN'S "INVASION OF THE BODY SNATCHERS" ON AUGUST 2ND!

You may find this hard to believe, but I have never seen the original INVASION OF THE BODY SNATCHERS starring Kevin McCarthy. However, I have seen this 1978 remake, which is a classic in its own right, and I am super excited that it is getting the royal treatment by those magnificent folks at Scream Factory! It's time to point and shriek with joy fellow pod people!

One by one, the residents of San Francisco are becoming drone-like shadows of their former selves. As the phenomenon spreads, two Department of Health workers, Matthew (Sutherland) and Elizabeth (Adams), uncover the horrifying truth: Mysterious pods are cloning humans — and destroying the originals! The unworldly invasion grows stronger with each passing minute, hurling Matthew and Elizabeth into a desperate race to save not only their own lives, but the future of the entire human race.

Extras:
Scream Factory appears to have outdone themselves yet again! A new transfer, a new commentary, and numerous new interviews help bolster an already impressive list of extras ported over from MGM's previous release. INVASION OF THE BODY SNATCHERS will be available everywhere on August 2nd, but you can get it two weeks early with a limited edition poster (only 500 available)  if you order it ASAP from SHOUT! FACTORY!

If you don't mind waiting, you can order it from AMAZON.COM instead and save a few bucks! Either way, you should highly consider adding this to your collection Vault Dwellers!